A collectable amongst Christmas enthusiasts

For many people – especially the working-class communities of the Ashington Collieries of the late 19th to mid-20th centuries – Christmas was a time of hardship and uncertainty.  This Christmas tree would have been considered a significance purchase for a pit family. It was bought in 1935 as a present for a girl in Bedlington by her mother and father.  The father started working at Bedlington Colliery in 1906. It remained in the family until the mid-2000s.

The feathered Christmas tree is considered one of the first artificial Christmas trees, originating in Germany in the late 19th century, and becoming popular in the United States shortly after. The invention of the artificial tree had its ‘roots’ in environmental concerns around deforestation in the late 19th century. The product was also advertised as a more efficient alternative to the traditional spruce because it did not shed needles and could be used multiple times.

The Christmas tree is made from dyed green goose feathers that are attached to wire branches, which are wrapped around the central pole that is covered in brown paper, like a trunk. The tree is decorated with red berries and has holders in which to place lighted candles.

Today this early artificial tree is considered a collectable amongst Christmas enthusiasts, although it can pose a serious health and safety risk! 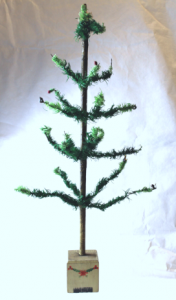