160 years after the Hartley Colliery Disaster

On this day, 160 years ago, the tragic Hartley Pit Disaster was a day that changed mining history.

The Hartley Bunton is arguably one of Woodhorn Museum’s most important objects in the collection; the massive oak bunton which had blocked the pit shaft, retrieved after the disaster in two pieces. Many of you will have never seen the object as it is cared for in special environmentally monitored stores which are not accessible to our visitors. 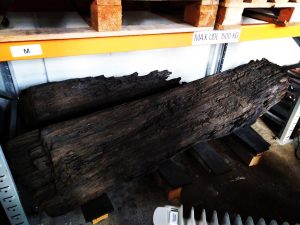 The Hartley Colliery disaster (also known as the Hartley Pit disaster or Hester Pit disaster), was a coal mining accident in Northumberland, England, that occurred on 16 January 1862 and resulted in the deaths of 204 men and children. The beam of the pit’s pumping engine broke and fell down the shaft, trapping the men below. The disaster prompted a change in British law that required all collieries to have at least two independent means of escape.

We share the names of the men and boys that lost their lives that day below.

The aftermath of the disaster deeply affected the village of New Hartley, financially and emotionally, as can be seen in the tragic numbers recorded below,

407 family members lost their protectors in the unfathomable disaster