Edwardian journals, sketches and photographs associated with the Berwick Quintet.

The collection at Berwick Museum and Art Gallery contains all thirteen volumes of the Edwardian journals, sketches and photographs associated with the Berwick Quintet, formed during the Christmas break of 1898 by five childhood friends from Berwick who were choir boys at St Mary’s Church. When members of the group began to move away from Berwick following new professions, it was decided they could stay in contact through writing to each other. Many of the letters they sent during this time were accompanied with sketches and photographs.

All five founding members of the Quintet had successful careers.

James Wallace was born in Blyth, Northumberland 1872, and produced the watercolours to accompany the works. He was an established artist having studied at the Royal College of Art School.

Rupert King eventually settled as a Clergyman in Northumberland.

In 1899 James King passed away aged 39 from typhoid, following a trip to the continent earlier in the year. He was the schoolmaster at Lancing College Sussex.

The group was greatly impacted by the loss of their friend James, and it was not until 1905 that they decided to welcome another new member; Travers Hegearty. Travers moved to Hollywood where he was cast as Clarence the Angel in It’s a Wonderful Life.

The Quintet disbanded in 1913. The journals they produced give us insight into what life was like in the early 20th century, with a focus on travel and architecture during this period. 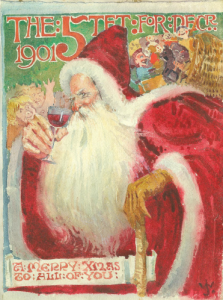