On the 4th and 5th of August 2021 Woodhorn Museum opened specially for visitors to allow the BBC Antiques Roadshow team access to our wonderful Museum for a blockbuster two days of filming. The sun was shining, and the colliery outbuildings looked truly magnificent illuminated in the sunlight. It was to be a very special two days, which until now we have had to keep very quiet about!

On the 4th and 5th of August 2021 Woodhorn Museum opened specially for visitors to allow the BBC Antiques Roadshow team access to our wonderful Museum for a blockbuster two days of filming. The sun was shining, and the colliery outbuildings looked truly magnificent illuminated in the sunlight. It was to be a very special two days, which until now we have had to keep very quiet about!

Highlights included host Fiona Bruce presenting to the nation stories associated with the mining life and culture of Northumberland under the backdrop of our object collections from The Ashington Group artworks to the Hartley Bunton to name a few.

Each object from the collection that inspired the direction and interpretation during the two days of filming will be included in this blog. Museum staff also wanted to reflect on the many enjoyed hours we spent with the golden ticket holders over the course of filming. Often finding out so many inspiring stories rooted in Northumbrian history, many of whom were once miners in the local pits or relatives of very famous footballers.

The Cage Shop, which is used as one our outreach rooms, was set up as a handling session space on the days of filming.  One of the most poignant moments was with an ex-miner from Lynemouth Colliery called Cornelius Watson.  He immediately recognised the tally board firstly as the one from Lynemouth and secondly, as the one he used to hang his tally on, Number 166.

In 1959 when Cornelius was 15, he left school to start working down the mines. He worked as a Face Worker in Choppington Colliery in the pit known as Low Pit. He then moved to work at Lynemouth Colliery where he was also a Face worker and where his tally number was on show on the Tally board, Number 166. After finishing at Lynemouth he went to work at Whittle Colliery in Alnwick as a maintainer until the pit closed in 1987. It was just by chance that on the very day filming happened he was there to come face to face with not only a part of Northumberland’s Mining history but his own personal history as well.

Tally boards like this would have been used to keep track of all the miners who were working in the pits at the time. The boards were usually made from wood or similar solid and sturdy materials and engraved or marked with numbers and holes for hooks to hang the tallies on.

Tallies are tokens with the miner’s unique identity number on.  The miner would start his day at the pit by finding two tallies with his unique number on the tally board. He would then take one tally with him into the pit while the other was left on the board to show he was working below ground.

This allowed a health and safety tracking system to be used in case of accident or disaster occurring, meaning that any rescuers going down the pits could identify how many men were trapped or hurt. Each miner would have the same number throughout their working time in that pit.

The Ashington Group, also known as the Pitmen Painters, produced hundreds of paintings showing what life was like both above and below ground for their mining communities in Northumberland. They began as an art appreciation class in 1934, through the WEA (Workers Education Association). Their tutor wanted them to learn about art though ‘doing’ so the group started to paint.

‘Start painting. It’s as simple as that.’ Oliver Kilbourn

We couldn’t have been more delighted when the Antiques Roadshow showed an interest in one of many pigeon clocks in our collection. To us they are incredibly representative of Northern culture. If you have lived in the Northeast or have had relatives in mining, you will be very familiar with pigeon racing or fancying (keeping pigeons).

Pigeon clocks were a major part of pigeon racing. Pigeon racing required the use of a specific breed known as the Racing Homer with the earliest official race being recorded as far back as 1806. Competing birds were taken from their nesting lofts, then released to find their way home again. The time and distance that they travelled was then recorded with the fastest bird declared the winner. The means of recording these times and distances was by using a Pigeon Clock. Below you can see images of the pigeon clock mechanism.

This clock belonged to Fancier James Armstrong from the Embleton branch, dating to around 1965. James formed an interest in pigeon fancying from a very young age, having grown up watching his father and grandfather tend to their pigeons.

The clock was made by the German manufacturer Benzig. It was founded by Frederick Benzig. They are one of the earliest manufacturers of the pigeon clock, making their first designs as far back as 1890. Frederick Benzig along with his grandson Ernst Jakob began building the clocks and in doing so they encouraged pigeon racing to spread all over the world. The firm continues to manufacture these clocks to this day, with modern versions being more compact and easier to carry.

Timing clocks like this one have remained relatively similar since their invention with most clubs still allowing examples such as this to be used to compete against more modern electronic clocks. On the day this clock was filmed we allowed presenter Fiona Bruce to make the mechanism work, the clock is now stamped with that very moment in time.

A New Donation to Mark the Occasion

Woodhorn Museum could not have been more thrilled that the BBC Antiques Roadshow filmed here in the Summer of 2021. The excitement from the days of filming didn’t just end there for us. We are now proud custodians of an iconic Antiques Roadshow official boater and sash. The BBC team kindly donated them to Woodhorn Museum on the last day of filming so that we have a tangible lasting memory within our collection of the monumental day. You might recognise them if you are a fan of the series. The sash and boater are worn by stewards on the days of filming, the stewards help guide visitors to the experts amongst many other essential tasks that can change at any moment. This sash was worn by volunteer steward Chantal Bron.

This blog was co-written by Kelly Simpson, Collections Volunteer and the Collections Team. 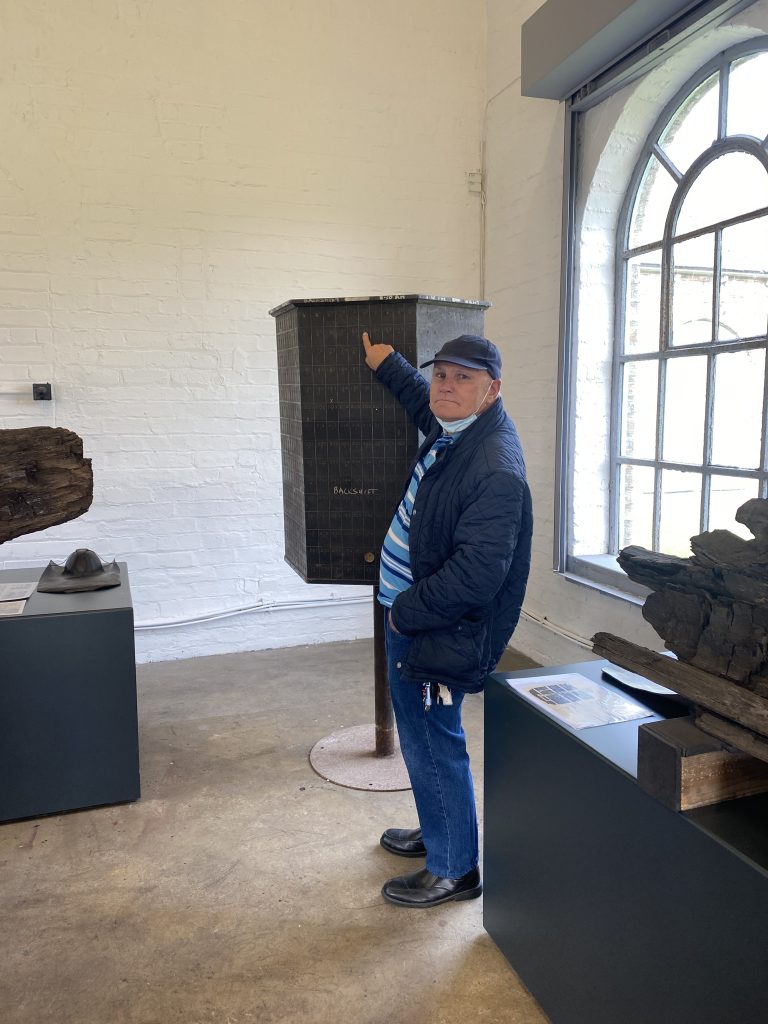 Cornelius Watson points at 166, his tally number from when he worked at Lynemouth Colliery. 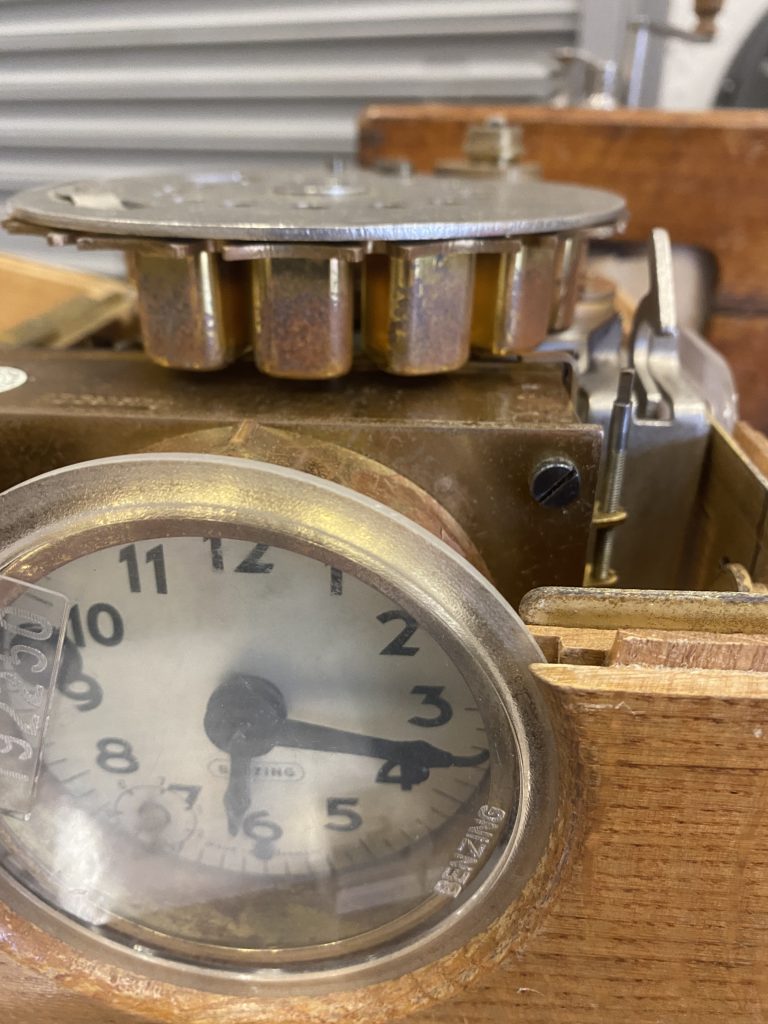 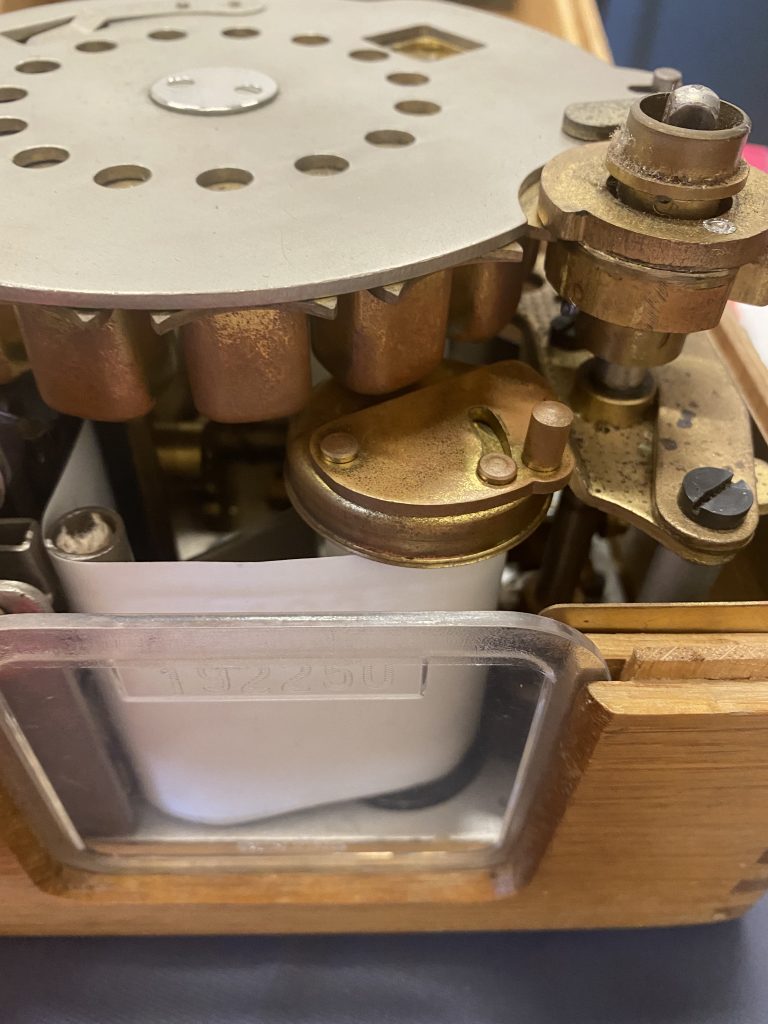 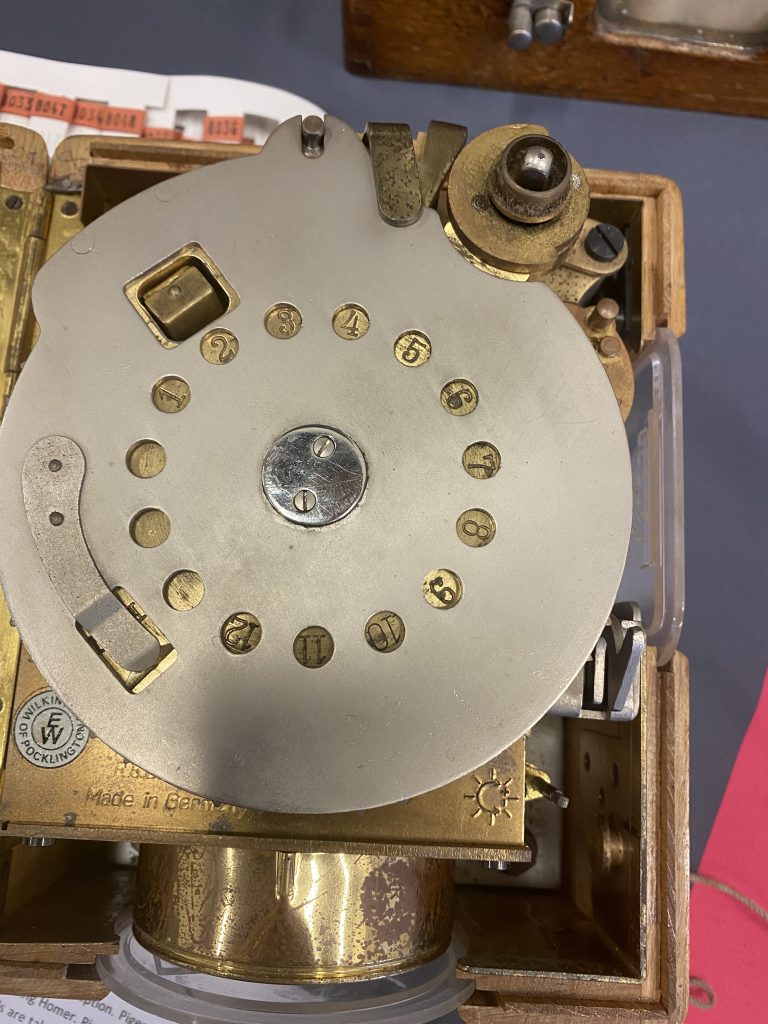 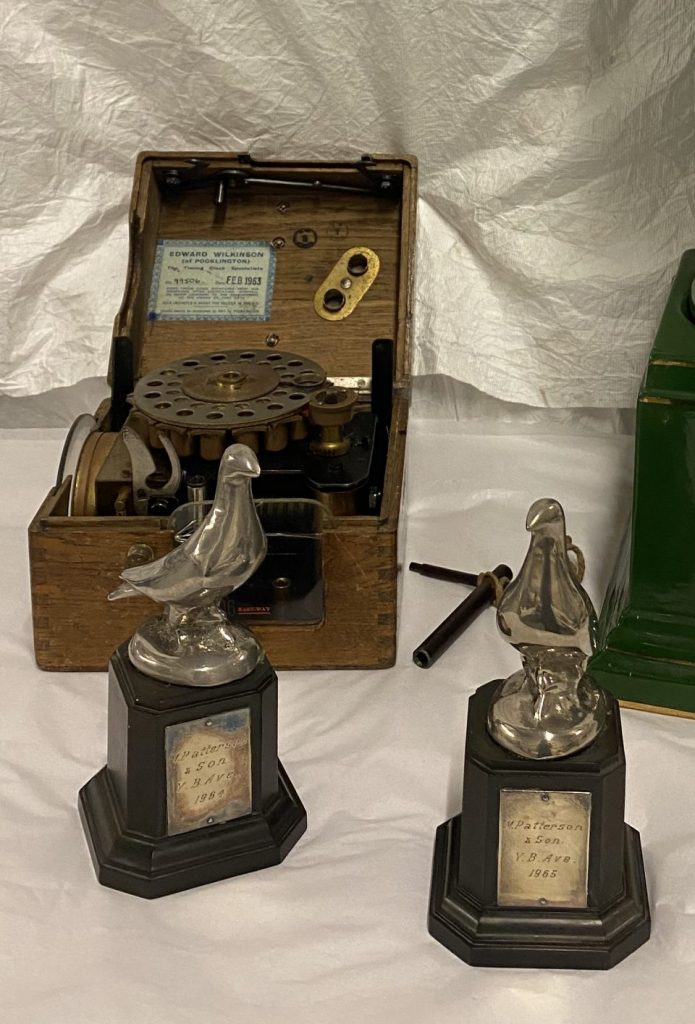 Benzig 192250 Pigeon Clock alongside pigeon trophies awarded to a father and son from Morpeth. Father and son Matthew Patterson and Robert, who were pigeon racers with a loft at Stobhill, near Morpeth. The trophy was presented to the young bird who had the average quickest time over 9 races. ‘Young bird’ was the term used for a bird born in the present year. All birds born in the year would be ringed according to the colour of the year and would remain on the pigeon for life. The birds would race in their year group, and after the first year they would be classed as an ‘old bird’. 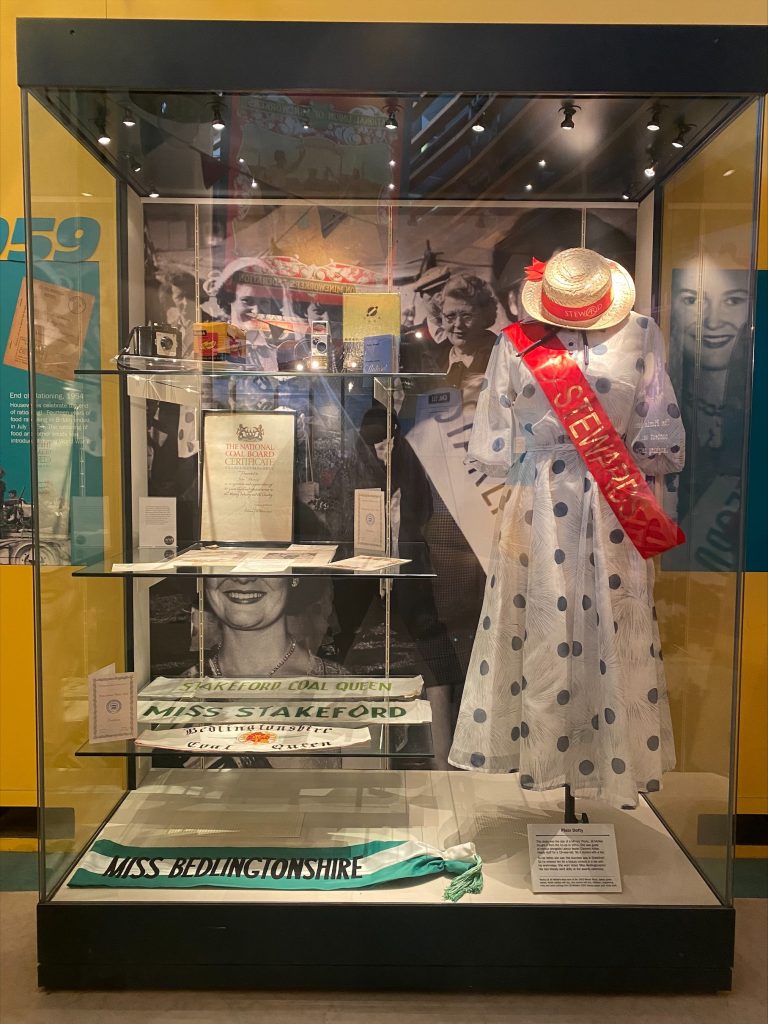 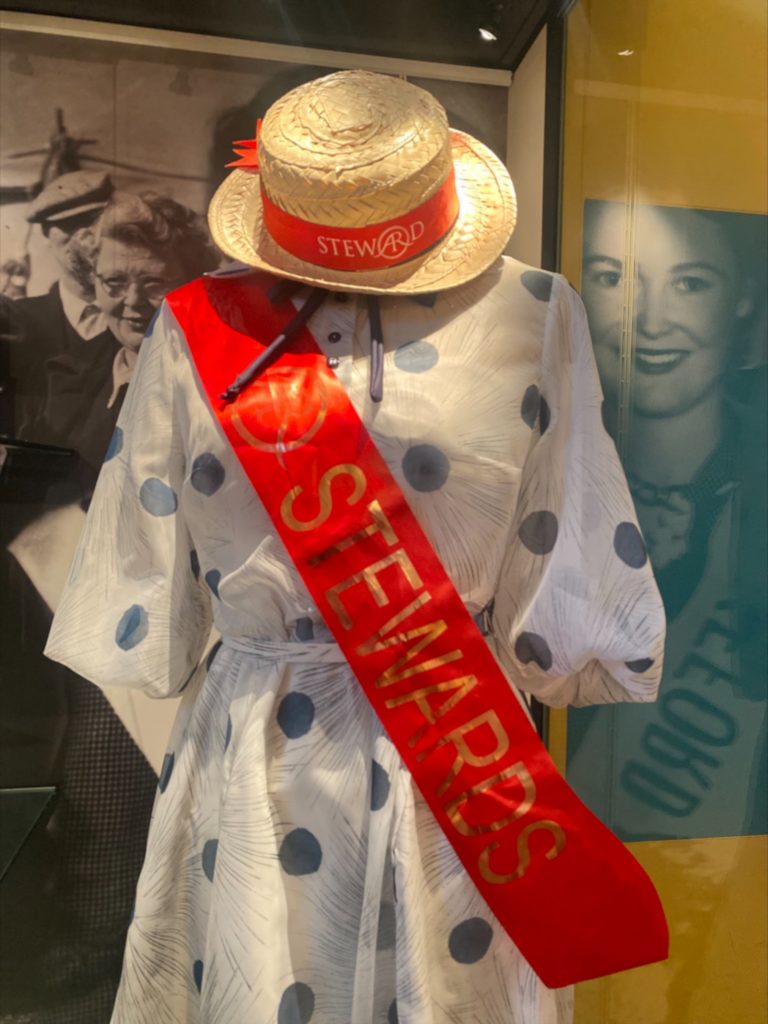 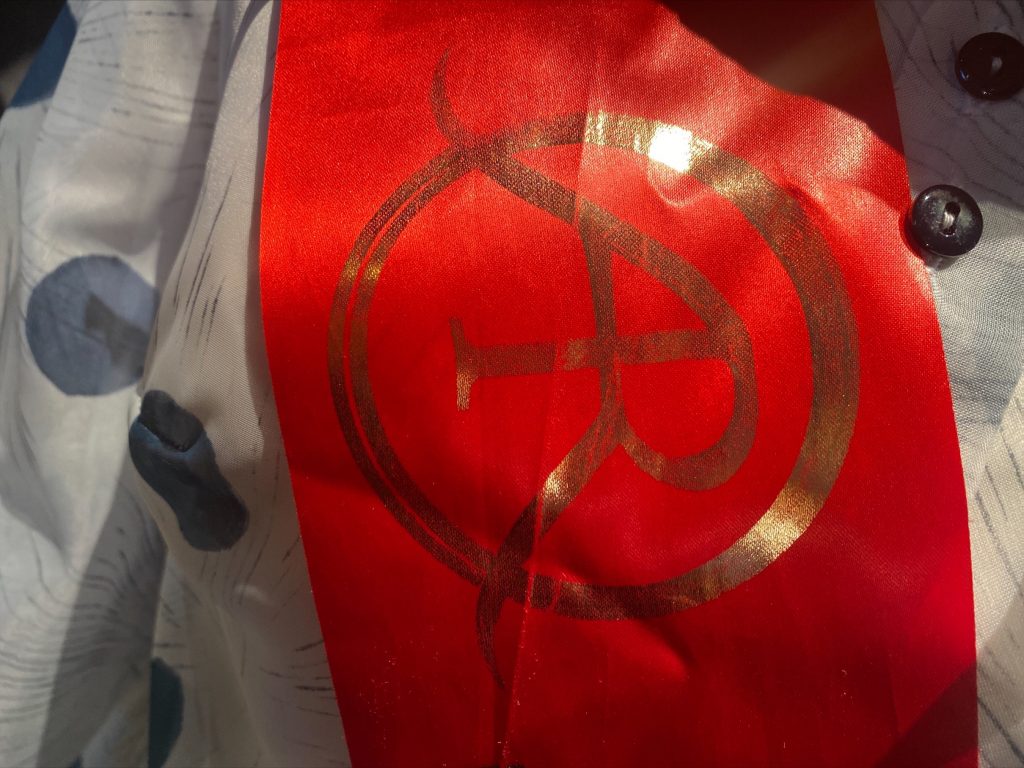 Close up of the Antiques Roadshow red sash with gold lettering 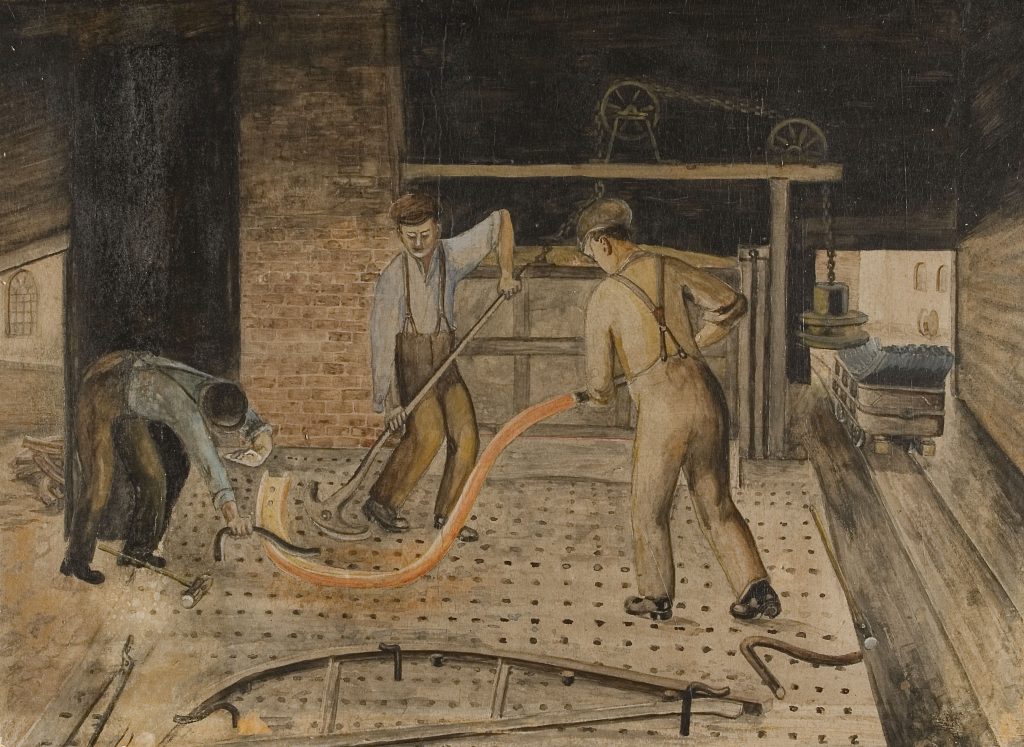 Resetting the Arch Girders by Tom McSloy, 1946. Oil on walpmur board.