Degas’ mastery of many differing artistic techniques was superb – as well as painting and drawing he experimented with photography and he sculpted, especially in his later years. Many of his later graphic works are drawn in pastel.

Sir William Burrell always claimed to be the first buyer of Degas in Glasgow, though the art dealer Alexander Reid had brought works across from France in the early 1890s, when Degas was still a relatively unknown artist.  Burrell bought his first Degas in 1901, but most of his purchases were in the 1920s and 1930s, when the artist’s prices were still quite low.  Sir William gave 17 of his 18 Degas pictures to his home town Glasgow.

The remaining picture – one of Degas’ best and most interesting late pastel drawings, “Danseurs Russes”, was retained for Berwick, part of a generous larger donation of 45 pictures by major artists, given by Sir William to form the basis of an art gallery for the town in 1949.   The drawing is undoubtedly the star item in the collections at Berwick.

Degas’ mastery of many differing artistic techniques was superb – as well as painting and drawing he experimented with photography and he sculpted, especially in his later years. Many of his later graphic works are drawn in pastel.

Degas specialised in scenes of contemporary life, but he is most famed for his paintings and drawings of dancers. Many of the artist’s works are now in major collections around the world – Berwick’s picture is one of a series entitled “Danseurs Russes” now scattered across the world in London, Stockholm and New York.

Following a visit by the Tsar Nicholas of Russia in 1896  there was a craze for all things Russian in Paris.  Several dance groups from Eastern Europe performed in the city at that time.  It now seems almost certain that Berwick’s drawing shows a troupe of Ukrainian folk dancers who visited Paris in late 1897, performing at the Moulin Rouge, the Folies-Bergères and at the Brasserie des Martyrs near Degas’s Montmartre studio.

While there, the exotically choreographed and brightly costumed dancers were sketched many times by the artist, as well as filmed by the early pioneers of photography, the Lumière brothers and Félix Nadar.  In film recently discovered at the Bibliothèque Nationale in Paris the poses shown in Berwick’s Degas drawing mirror exactly the dance steps shown in the motion pictures.

These dancers are not ethereal young ballet dancers – they are depicted wearing the flowing white smocks and beribboned headdresses of Ukrainian national costume, marking steps and beating out time with heavy leather boots.  The drawing has been rapidly executed – almost certainly sketched out in minutes – giving the pose a raw vitality and life, foreshadowing the earthiness of Stravinsky’s music and the stage designs which Picasso made for Diaghilev in the early years of the 20th century.

Ukraine had been part of the Russian empire for centuries and was also part of the USSR, though it always retained a distinct identity of its own. It finally became independent in 1991, when the Soviet Union dissolved after the Cold War.

The picture is extremely fragile. It is drawn in charcoal & pastel onto tracing paper, which has been laid onto a card base. If you look very closely at the picture you can see patches where the tissue has bubbled up slightly, and there are patches of discolouration, particularly at the top edge.

Sir William wrote in 1949: “I am very sorry I never met Degas. Reid might have taken me to his studios had we been in Paris together, but I was hardly ever in Paris at the same time as Reid”. One wonders how well the reclusive and morose artist would have got on with the self-effacing and sometimes difficult art collector.

“Examining the quality and accuracy of our storytelling, and the collections information we share is a key responsibility. New information is discovered all the time, so we have to be responsive.

“Our decision to update the interpretation panel for Degas’ ‘Danseurs Russes’ to emphasise the dancers’ probable Ukrainian identity reflects the current understanding of this work.

“Because we don’t know if the dancers in the artwork described themselves as Ukrainian or Russian, we don’t think it’s necessary to change the title of the picture at this time. We do know it was the title the artist afforded it, and as a Borders County, fully appreciate that identities are personal, complex and fluid.

“By continuing to review the items in our collections at Museums Northumberland in partnership with our communities and peers, we can ensure audiences are presented with accurate, detailed and modern interpretations of works on display, and within our archives.” 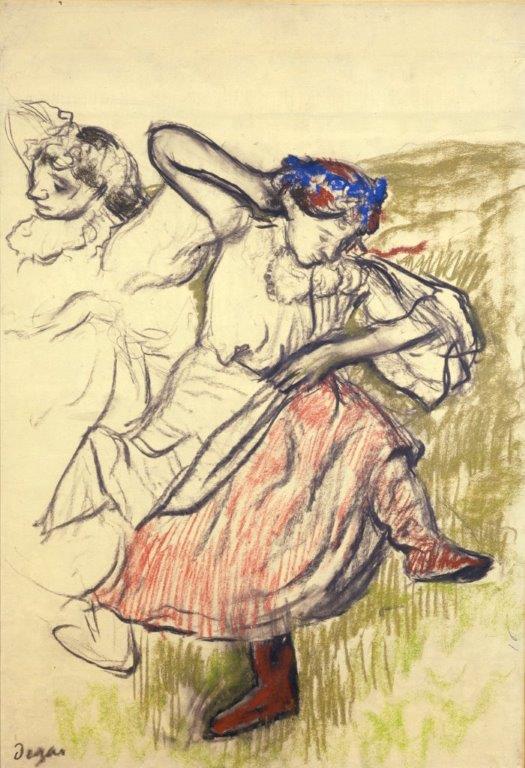 Pastel, charcoal & pencil on tracing paper laid down on card