This week we are looking at a unique collection from Woodhorn Museum, focusing on the work produced by one of the last Pitmen Painters, Walter Bell. 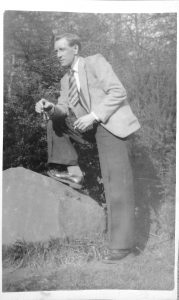 Walter Bell joined the Ashington Group in the late 1950s after his war service as a telegraphist and radio operator on HMS Haydon, a minesweeper in the Mediterranean during World War II. After this he was a mines safety inspector. Unlike many of the Group, Bell never painted in the famous ‘hut’ – all his painting and drawings were done at home and taken to Ashington to show the other members his use of materials and new techniques.  His son Francis explains that Bell was committed to “help[ing] Oliver Kilbourn (his friend) to promote Robert Lyons’ message of self advancement and expression to the group.” 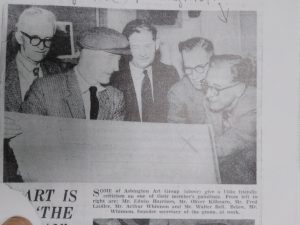 Walter Bell, with other members of the Ashington Group, ‘offering friendly criticism’ of one of Oliver Kilbourn’s paintings (Bell is on the right, Kilbourn is second left, wearing cap)

‘The Pay Check’, based upon his experiences at Ellington Colliery, was painted soon after. “There was an argument about wages,” explained Walter, to The Journal in 2010. “My brother Adam was arguing with the officials over the money they had been paid. There was so much activity, I thought it would be a perfect scene for a painting.” ‘The Pay Check’ was exhibited and sold at Newcastle’s Laing Gallery in 1959 and the funds went back to the Ashington Group to be spent on more materials. Walter’s son Wally Bell, now a resident of the United States, made it his mission to find the painting – he tracked it down and had several copies made – one of which was donated to Woodhorn Museum and added to our Pitmen Painter collection. 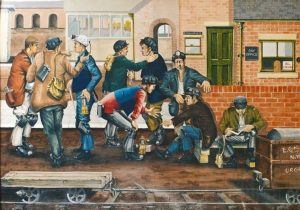 A copy of Bell’s original The Pay Check, in Woodhorn Museum.

In 2018, Walter’s son Francis L. Bell (and Bell’s nephew Bobby) kindly donated some more items to Woodhorn Museum. The donation included a photograph of Walter the year he joined the Ashington Group in the mid-fifties (see above), a series of sketches, copies of cartoons and portraits, together with a remarkable painting of Saladin – the twelfth-century founder of the Ayyūbid dynasty, and the most famous of Muslim heroes. A black and white photograph of Walter painting Saladin was also donated. 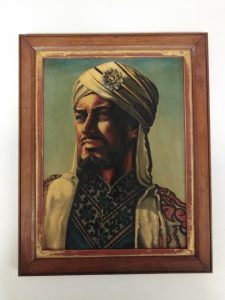 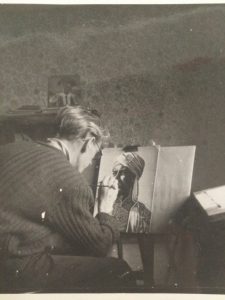 Saladin by Walter Bell; photograph of Bell in his ‘studio’

According to Francis, Walter “would never refer to himself as an Artist or Painter, preferring the title Illustrator, which in a way reflected his modest, unassuming attitude to his craft.” His interests in illustration are evident in two sketches (also part of the donation), that show Bell and his brother Adam who co-owned a boat they called ” Viking”. These sketches were part of Adam’s scrapbook collection and were donated by Adam’s son Bobby.

Taken as a whole the donation sheds new light on the ways the Ashington Group worked, their wide range of interests, and is an important document of their development from the 1950s onwards. Like Oliver Kilbourn, Bell seems to have been a confident painter of diverse, and often non-mining related, subjects. 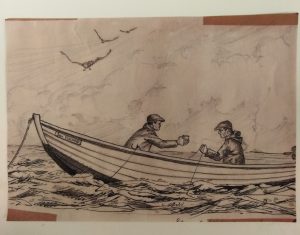 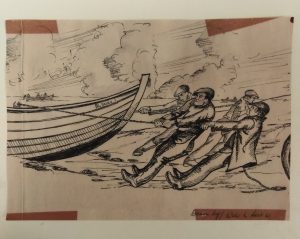 Two sketches of Walter and Adam with their boat ‘Viking’

In the 1960s Walter was Dust Suppression Officer at Lynemouth Colliery but he then left the industry to complete a teacher training course. He was appointed as a Teacher at Newminster Middle School at Morpeth; his thesis being A Historical and Architectural Survey of The Church of St Mary the Virgin, Woodhorn, Northumberland – this work has been deposited with Northumberland Archives. He spent the rest of his career teaching engineering drawing, and later art, at Newminster School.

We would like to thank Francis and Bobby this important donation. For more information please contact: collections@museumsnorthumberland.org.uk