John R. Jenkins was a member of the Ashington Group. He died aged 34 on a descent of Mount Blanc in 1947.

It was a pleasure to welcome David and Lesley Jenkins to Woodhorn Museum recently. David came to tell the collections team about his father, John Rickatson Jenkins (1913 – 1947) and to donate a copy of a book about his life. John R. Jenkins was a remarkable man: a writer, mountaineer, miner and conscientious objector – he also joined the Ashington Group around 1942. 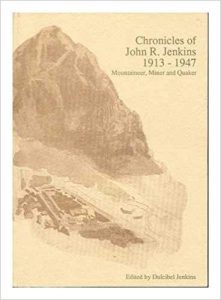 His first contribution to the Ashington Group was to pay for the installation of electricity at the famous Hut, after it had been relocated from Long Horsley to Hirst Yard in July 1943. His paintings are very rare and Woodhorn Museum does not possess any of his original works. His son David however has a painting, ‘The Filler’, dated 1942 and stamped on the back with the ‘Ashington Art Group’. 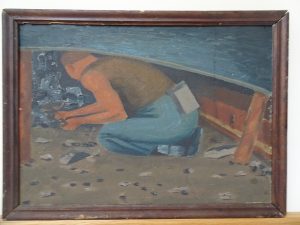 Jenkins was educated at Leighton Park School near Reading and went on to study Natural Sciences and Mining at Birmingham University. He joined his fathers’ Mining Engineering Company at Worcester and thereafter visited many of the leading collieries in Britain, France, Germany, Turkey and India. He also wrote studies on the physical structure of seams and the ‘science of roof caving’; his detailed analyses of all aspects of colliery procedure were taken up by various authorities (including Lord Hyndley at the National Coal Board) and it could be said that his recommendations improved the conditions of many miners during the interwar period.

When war broke out in 1939, his fathers’ firm began making munitions. As a Quaker Jenkins was strongly committed to principles of non-violence and anti-militarism, and as a result he left the company and joined the Friends’ War Victim Relief Service. This organisation was set up to aid the local population during German attacks, particularly during the Blitz years in major cities. It is possible that Jenkins was seconded to Tyneside during this time.

Later he went to the Ashington Coal Company, where his technical knowledge and drive brought him rapid promotion. He developed a boys’ training scheme, organised a model training coal face for adult workers and was elected a member of the National Council of Juvenile Employment. He also became Under Manager and Planning Engineer. He was highly praised in this role: “He was able to combine … high administrative skill in the technical side of his work with deep human concern for the daily lot of those with whom he worked.”

At this point he joined the Ashington Group, and painted ‘The Filler’ in a style reminiscent of Oliver Kilbourn’s ‘My Life as a Pitman’ cycle. It appears as though Jenkins was on good terms with Kilbourn – his family have a beautiful landscape of Langdale in the Lake District by Kilbourn (as well as other works by Jimmy Floyd), presumably bought by Jenkins or given to him by the artist.

From a very young age, Jenkins was passionate about walking and climbing. He regularly climbed in the Pennines and Lake districts; he even climbed the Matterhorn aged 16. According to Michael S. Taylor (who wrote his obituary) “Jenkins spent every summer, except that of 1937, in the Alps, preferring the Bernese, Oberland, the Valais and Chamonix districts. Except for the Zmutt ridge of the Matterhorn, every climb was guideless, for he felt that self reliance, the planning of the climb and being one’s own master were essential to the keenest enjoyment.” In 1938, Jenkins with Michael Taylor and two other equally young climbers went by train across Europe to Russia and the North Caucasus for a brief but exceptional expedition. Jenkins‘ and Taylor’s ascent of  the north face of Tetnuld earned an entry in Chris Bonnington’s book – ‘Great Climbs’.

His artistic sensibilities were keen. Although he regarded himself as more of a writer than an artist, it is clear that he had a visual imagination, as this diary entry from Imperial Hotel Agra shows:

“I have just seen the Taj Mahal by moonlight. My head is still in the clouds and before I become my usual cynical self I want to write what I feel… It is quite unearthly like an inspired dream painted on a backcloth… I floated rather than walked, my eyes fixed on that miracle of symmetry. … It could have been drawn with a white pencil on blue paper. The shape and shadows are blended into a perfect symphony of light, no colour – just ivory white and blue shadow. Quite close to it looked like a painted canvas in the moonlight and I had to touch it to make sure it was marble.”

On the 6th August 1947 Jenkins was with a party of four climbers making the descent of Mont Blanc via the Brenva route. This route encompassed a glacier and some of the most challenging climbing in the Alps. The weather was uncertain and snow choked up the climbers’ boots and crampons. A group ascending the Brenva route told Jenkins that conditions below were good and the party proceeded, one at a time, with Jenkins leading. His climbing partner H. E. ‘Nully’ Kretschmer followed, attached to Jenkins with a rope, belaying with his ice-pick. About halfway down a 1500 ft slope Jenkins slipped. The Alpine Journal from that year describes the accident:

“[F]or a moment as Kretschmer crouched over his axe the party above could not see whether [Kretschmer] had held [Jenkins] or not. Shouts from above received no answer, and there was no sign of Jenkins and Kretschmer when the second party reached the spot. The accident happened about 10.15 or 10.00 am […]

The rest of the party spotted one of the bodies some 500 ft below but they were inaccessible. The next five days were spent trying to retrieve the bodies, which were eventually brought down by an avalanche and buried beneath a further avalanche at the foot of the Gussfeldt Couloir.

One of his companions, R. A. Hodgkin, on this his last climb, wrote of Jenkins: ‘Only a few hours before his death he sat in the snow outside the Gouter hut on Mont Blanc making a sketch, and remarked: “One would like to print this scene on one’s mind for eternity.” … ‘Both John and … Kretschmer stayed out longer than the rest of us, watching the sun as it sank into the cold cloud banks of the Jura. John sat on a spar of wood silently and chillily drawing the view in his sketch book. He knew that such moments cannot be fixed on paper. He knew that the most a man can do is to deepen his vision by effort. I think it was the most beautiful sunset any of us had seen in the Alps that year, or in any year, perhaps.”‘