In June during Gypsy, Roma and Traveller History Month, we took a look at Jimmy Floyd's paintings of a gypsy camp near Rothbury...

‘Gypsy Camp (Rothbury)’ depicts in some detail a panoramic landscape scene of ‘Gypsy’ life in Northumberland. People gather around fires and cooking pots; children play in the stream, horse and traps roam between the vans and tents. The bright use of colour is typical of Jimmy Floyd’s work, particularly the landscapes and animal paintings which he favoured in his later years.

The landscape itself may possibly be identified with a specific place: the stream that runs beside the Coquet near Thrum Mill. This beautiful spot in the foothills of the Cheviots looks westwards to the hills and has long been associated with gypsy culture. It is also the setting for the folk tale, ‘The Faa’s Revenge’, a story about a dispute between the local lord Clennel and Willie, King of the Faa Gypsies. The writer describes a seasonal/semi-permanent gypsy camp, which was approached by “treacherous moss and over coarse heather hills” and in a “clearing in the wilderness … there lay the primitive village of the Faas, scores of turf hovels scattered over a valley floor.”

It is clear that Floyd’s view of gypsy life is very different to the folk tale: while the writer emphasises the squalid and dangerous aspects of the camp, Floyd’s camp is animated, vibrantly coloured and bursting with life. As Robert Lyon, Floyd’s art tutor, said in an interview for Everybody’s magazine,‘They [Floyd and the Pitmen Painters] have learned that what matters is the inner feeling of the thing, and they have learned to paint by the feeling.’ Floyd, like many other artists in the twentieth century, saw gypsies as symbols of free movement and independence and he was drawn to them, painting this scene and another (Gypsy scene Untitled) in 1949. The latter was given to his friend Harry Wilson, who donated it to Woodhorn Museum. 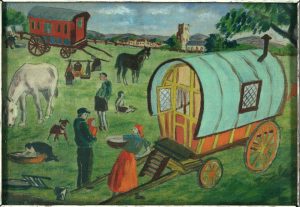 ‘Gypsies’, travellers and Roma, have a strong history in Northumberland. Some common words in the local dialects – like ‘shan’ or ‘bari’ for example – have their origins in the Roma language. Just over the border in Kirk Yetholm, the ‘Gypsy Palace’ still stands which was home to the ‘Queen of the Gypsies’ Esther Faa Blythe. There is no living Queen or King of the Gypsies in Northumberland or Scotland, although it has been reported that there is still a living descendant who has no interest in the throne.

This article was written by Louise Brooke (Collections Volunteer)

If you know where this scene was painted in the 1950s, let us know: collections@museumsnorthumberland.org.uk