The slides were very popular in the mid-19th century and were mass produced. Slides depicted many scenes including portraits, interiors, wonders of the world, theatre and much more.

Slides taken from Berwick Museum’s collection published in France in the 1860s. Each slide has two images next to one another, the same distance between your eyes. Once viewed through a stereoscope, the images align together so that one is on top of the other, giving the illusion of 3D. Each slide is produced on a thin card with colour added to the back of the images through tiny holes, making the images appear to come to life once the stereoscope is held towards the light.

The viewer taken from Woodhorn Museum, dates to 1890-1900, made by Martinet Maison, a French company. It was designed to be used on a table top and would have stood out with its ornate detail. The stereoscope and graphoscope are part of the same hinged piece of wood, allowing for a compact design that was popular around the end of the 19th century.

This is a combined graphoscope and stereoscope viewer, used to magnify pictures and postcards that were often too small to discern the detail. The stereoscope aspect was used to create an interesting 3D effect on specially designed cards that were popular at the time. Often, the subject of the pictures would be popular tourist spots.

The slides were very popular in the mid-19th century and were mass produced. Slides depicted many scenes including portraits, interiors, wonders of the world, theatre and much more. Due to the popularity of the slides it was not uncommon for many Victorian homes to have one, providing a popular form of entertainment for the family.

‘The ballet La Biche au Bois’, translated as ‘The Doe of the Forest’, was known In France at the time as a ‘feerie play’ – ‘fair-play’ in English – initially produced in 1845. Feerie play was a theatrical genre which explored fantasy including lavish sets and bombastic scenes, interwoven with the supernatural to translate fairy tales from the French tradition. As a result, feeries were often considered to not be ‘serious’ theatre. However, they were very popular amongst French audiences from the early 1800s, continuing throughout the 19th century.

‘La Biche au Bois ou le Royaume des Fees’ was performed at the Théatre de Châtelet in 1896 by the Cogniard brothers. Both worked as playwrights and theatre directors. To date we do not know the definitive number of works produced by the brothers, due to the scale of their portfolios.

The slides of La Biche au Bois act as animated photographs of the ballet performed at the Chatelet of 1896. The slides go some way to depicting the extravagant sets and performances the audiences would have enjoyed. Jacques Ducom staged and shot the production that would be transformed into chronophotograph, which is created using several frames of print, arranged like an animation, and which pre-dates video. The use of chronophotograph in La Biche au Bois enabled Ducom to capture the early special effects in the theatre.

The Cogniard production at The Chatelet was considered the grand feerie of the season, and from the year 1896-1897 the play was reportedly performed 140 times, marking 12,972 francs.  In today’s money that would be the equivalent of around £1,064,343.52. It is believed that a significant proportion of this amount would have financed the chronophotograph. 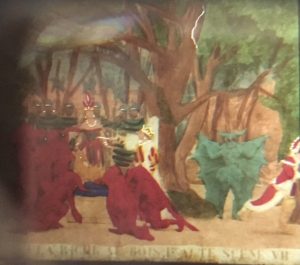 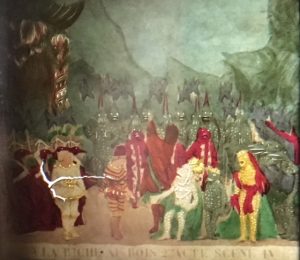 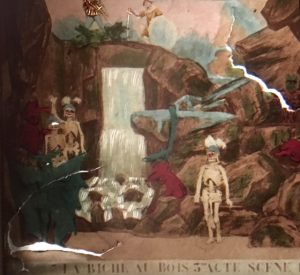 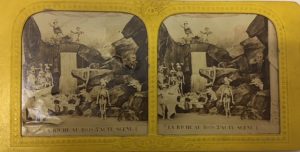 All items not stamped with the mark of Paris Theatres or my marks BL or BD, Editor will be considered counterfeit, and in France or abroad must conform to international regulations.

The depiction of skeletons and ghosts in humorous scenes during the 1800s was very popular. The creation of such scenes imitated the discoveries of the everyday including photography and x-ray. The long exposure on a photograph gave ghostly effects and the human form in x-ray was a gruesome marvel. 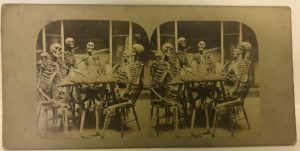 This group is principally formed of those who were compelled to ‘leave their country, for their country’s good.’ The group has been arranged by a skilful anatomist and is accurate in all its details.