Inuit carving made from soapstone by artist Ennutsiak (1896-1967)

Inuit cultures developed within the harsh climates of the North American half of the Arctic Circle. Many Inuit peoples had a nomadic or semi-nomadic existence, moving from place to place to subsist on hunting.

Inuit carving made from soapstone, also known as steatite. Soapstone is a type of metamorphic rock that consists primarily of the magnesium rich mineral talc. It is given its name because of the close similarity to the texture of soap. Its high talc content makes it an excellent material for carving, which has been a mainstay activity within Inuit communities for thousands of years.

Inuit cultures developed within the harsh climates of the North American half of the Arctic Circle. Many Inuit peoples had a nomadic or semi-nomadic existence, moving from place to place to subsist on hunting.

Families would produce small hand-sized carvings and cookery utensils using tools made from stone and animal bones. Early carvings would be produced from ivory or caribou antler as well as soapstone and serpentine. Materials used for sculptures vary widely, owing to the nomadic nature of Inuit societies and the wide geographical regions people covered throughout their lifetimes.

Stylistically, the carvings also vary in design, with some being more intricate than others based on the subject and the materials used. This carving depicts a traditional Inuit birthing position, with the mother attended by a midwife behind her, both kneeling. The piece dates to the 20th century and may have been produced to trade. During this time Inuit art was traded across the Americas and Europe.

The piece was carved by the Inuit artist Ennutsiak (1896-1967), who was born in Nunavik, Quebec. Nunavik means ‘great land’ in the local dialect of Inuktitut and the Inuit inhabitants of the region call themselves Nunavimmiut. Ennutsiak was well known for his detailed carvings depicting daily life in the Arctic. In his later years, the artist settled in Iqaluit which translated means ‘place of fish’ as the area is known as a traditional fishing area used for thousands of years by arctic indigenous peoples. His works are considered highly collectable amongst Inuit art collectors.

Today, Ennutsiak is regarded as one of the most notable Inuit artists of the 20th century. His works can be seen in museums and galleries across the world, alongside more contemporary Inuit artists such as Damien Iquallaq and Heather Kayotak. 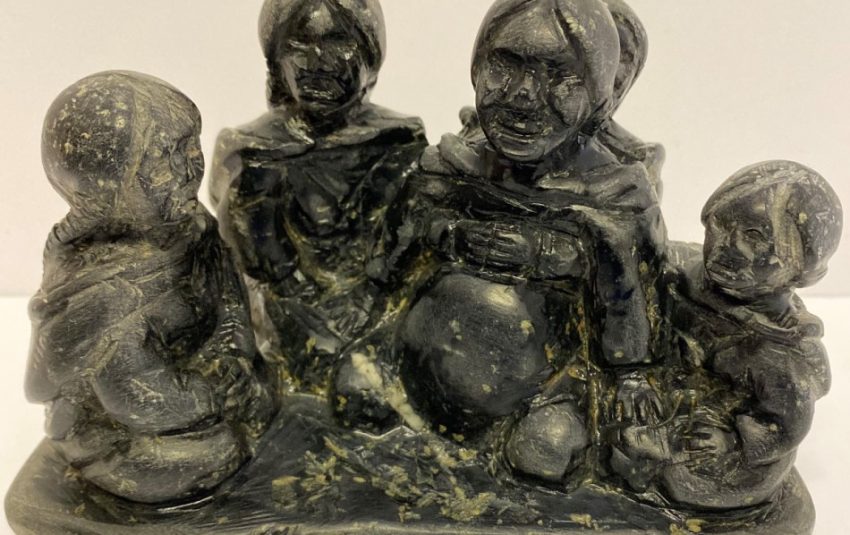