This unique object is part of the vast collection of social history objects at Berwick Museum and Art Gallery. Standing at approximately 40cm tall, this Boys’ Brigade doll is made from materials including wood, plaster, cotton and tape.

This unique object is part of the vast collection of social history objects at Berwick Museum and Art Gallery. Standing at approximately 40cm tall, this Boys’ Brigade doll is made from materials including wood, plaster, cotton and tape.

The doll dates to around the 1950-1970’s but it has no maker’s mark, so its exact origins remain a mystery. We can presume that it may have belonged to a child from Berwick who enjoyed, or was a part of, the Boys’ Brigade branch which used to meet at St Aidan’s Peace Church Hall.

One thing we know for certain is that this doll was taken very good care of. The plaster face is delicately hand-painted, much of which remains intact. This is highly unusual for a children’s toy as many display obvious signs of wear-and-tear, for example a missing eye or some colour worn away from the facade.

It is unlikely that this piece was manufactured in the United Kingdom as there was limited popularity for Boys’ Brigade dolls around this time. Such a piece is similar to the dolls produced in America, we can presume that this particular doll was made by an established toy manufacturer abroad.

The Boys’ Brigade movement is an international youth organisation established in Glasgow, Scotland in the latter half of the 19th century. The founder, William Alexander Smith (1854-1914), was born in Pennyland House, Thurso, Scotland. Aged nineteen, he joined the 1st Lanarkshire Rifles and in the same year joined the Church of Scotland. His continued support as a military volunteer and his commitment to the Church paved the way for his role as a Sunday School teacher. It is believed that it was at this time he had the idea to create the Boys’ Brigade (also known as BB).

Smith’s pioneering vision of widespread organised camping holidays and residential activities was a relatively new idea in the 19th century and it proved to be an incredibly successful one.

The BB still continues to this day and it is one of the largest youth Christian organisation in the UK and Republic of Ireland, with over 50,000 children and young leaders engaging with millions of children worldwide. They continue to hold Smith’s vision at the core of BB life and their distinctive uniform can be instantly recognised in over sixty countries across the world today.

The BB is synonymous with preparing youth for the world of work. It is organised in a way that mirrors the hierarchal structure commonly used in military training, with awards in each section that can be gained on the completion of training.

The BB is organised in a hierarchical way that reflects the structure commonly used in military training. It gives out awards in each section of training on the completion of training.

The organisation’s motto is ‘Sure and Steadfast’ and is taken from the book of Hebrews, Chapter 6, Verse 19. This is proudly displayed in their emblem, which depicts an anchor with the letters BB on either side and their motto emblazoned across the upper and lower sections of the anchor. The object is as follows,

“The advancement of Christ’s kingdom among Boys’ and the promotion of habits of Obedience, Reverence, Discipline, Self-respect and all that tends towards a true Christian manliness.”

The majority of countries have maintained the object as above. However, some have amended the wording to be gender neutral for those organisations who permit girls. The United Kingdom and Republic Of Ireland BB is open to children and young people aged between 5  and 18 and it welcomes people of any faith and background. Some groups only permit boys to join but a number of them are open to both boys and girls.

The doll came from the Berwick BB which meets at St Aidan’s Peace Church. 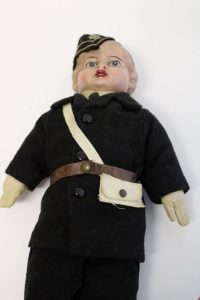 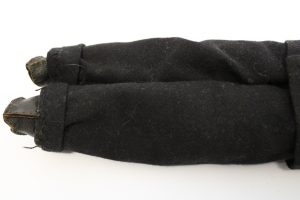