John Peacock was one of the last of the Newcastle Town Waits, a professional musician who played at official functions and sounded the curfew.

John Peacock is an interesting character.  According to William Green, the Duke of Northumberland’s piper until 1849, Peacock was the best small pipes player he ever heard in his life.  The great Tyneside engraver and champion of Northumbrian music Thomas Bewick seems to be in agreement with this opinion;

Sometime before the American war broke out, there had been a lack of musical performances in our streets, and in this interval, I used to engage John Peacock, our inimitable performer, to play on the Northumberland or small  pipes; and with his old tunes, and this ancient instrument, might, from neglect of encouragement, get out of use, and I did everything in my power to prevent this, and to revive it, by urging Peacock to teach pupils to become masters of this kind of music; and I flatter myself that my efforts were not lost.

John Peacock’s set of Northumbrian pipes is now a shadow of its original self, an assembly of parts made by a succession of people over the course of 150 years.  It nevertheless tells an interesting story connecting several important figures in the history of Northumbrian piping. 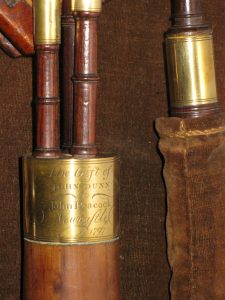 The set was made by John Dunn in 1797 as a gift for his friend, John  Peacock.  Not much of the original instrument survives, except for the ferrule on the drone stock, and this was engraved by Thomas Bewick. The set was added to by Jack Armstrong, the Duke of Northumberland’s piper, over a century after it had been originally made.

Bewick had paid for his son Robert to have music lessons from John Peacock and mentions this in his 1798 accounts;  “Cash to Peacock 10s. 6d.”  There follow regular entries over the next ten years; payments for lessons, tunes and manuscript music.

John Peacock is closely associated with the first ever printed collection of music for the Northumberland pipes – A Favourite Collection of Tunes with Variations Adapted for the Northumberland Small Pipes, Violin or Flute, which was published by William Wright of Newcastle, probably in 1801.  This book, with a frontispiece engraved by the Bewick workshop, is known today simply as “Peacock’s Tunes”, because it contains an illustration of the small pipes scale for a keyed chanter, with the inscription “a Compleat Drawing of J. Peacock’s New Invented Pipe Chanter”.

Peacock was one of the last of the Newcastle town waits; a professional musician who would be on hand to play at civic events and for the town’s curfew. Alas, a musician’s life at that time was often precarious, and Peacock came to a sad end, dying in penury in 1817.

It seems appropriate that his pipes are now on display in Morpeth, the town of his birth, next to those of his pupil Robert Bewick. Together, the two musical instruments form a lasting reminder of the flourishing artistic & musical scene centred on St Nicholas Churchyard in Newcastle upon Tyne during the early 19th century.

The set of Northumberland pipes entered the collections at the Bagpipe Museum in 2004, purchased by the Society of Antiquaries of Newcastle upon Tyne with the help of the Victoria and Albert Museum Purchase Grant Fund.

Purchased with aid from the V&A Purchase Grant fund.

A Memoir of Thomas Bewick, written by himself.  1862