Every year a memorial service is held for Northumberland miners who have lost their lives in service, which takes place on, or around, picnic day.

The annual Miners’ Memorial Service for Northumberland uses the Ashington Miners’ Memorial at Woodhorn as a focus for commemorations, with attendees paying their respects and laying wreaths at the foot of the plinth in memory of relatives, friends and workmates. Originally the memorial commemorated the Woodhorn Colliery disaster of 1916 but it has come to symbolise much more to the communities of the area. 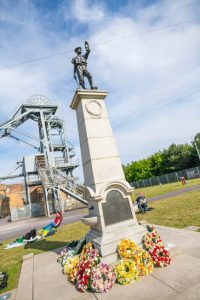 The Ashington Miners’ Memorial adorned with wreaths on Picnic day, after the memorial service. Credit Richard Kenworthy for Museums Northumberland.

The Ashington Miners’ Memorial was commissioned and paid for by mining unions and the Ashington Coal Company. It was erected in 1923 and located on Sixth Avenue, Hirst Park, Ashington. It was designed by William Henry Knowles (1857-1943), a renowned Newcastle Architect, and sculpted by John Reid (born c. 1890), Master of Sculpture at Armstrong College, Newcastle. It was moved and re-erected in 1991 at Woodhorn Colliery Museum. 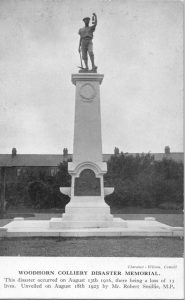 The instinct to commemorate mining disasters and the tragic loss of life associated with these terrible events is not new. The tradition of memorial glasses attests to this phenomenon, but the erection of a large, accomplished sculpture however, is more unusual. 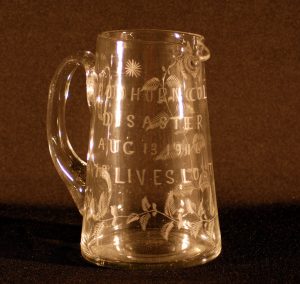 The grade II listed memorial is in the style of a World War One war memorial but, unusually, it is dedicated to a civilian accident. It features a bronze figure of a mining deputy holding a safety lamp in an outstretched hand. The figure stands on a white granite plinth and pedestal with low relief bronze panels and two drinking fountains.

The memorial was unveiled in a ceremony on 18th August 1923 by Scottish born Labour M.P. Robert Smillie.

Woodhorn Colliery was one of the five Ashington Coal Company collieries. 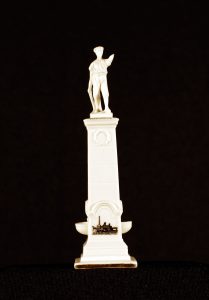 A repairing shift set to work in the main seam at Woodhorn Colliery on Sunday 13 August 1916.  The men were installing steel girders as roof supports. However, ventilation of the area they were working on, via an air compressor and fan, had not been operating correctly over the previous 24 hours.  Instead of safety lamps, the miners worked with naked flame candles, with inevitable results; there was a massive explosion, killing eleven men outright while two others died later, having never regained consciousness.

The Journal newspaper reported “The belief at first was that a belated Zeppelin had come on the scene, but it was soon known that a disaster had occurred in the mine.”

Walter Hughes: stoneman, 38, father of four. Sergeant in 7th Northumberland Fusiliers. Gassed in France. Spent several months in hospital and had only just returned to work the week before. He received military honours at his funeral.

Incredibly, in the wake of the disaster, seven bereaved families, left destitute without a wage, were evicted from their homes.

Twelve of the men are buried at Seaton Hirst and one at Ashington.