Pelham Puppets was founded in around 1947 by Bob Pelham, who became well known for making and popularising the marionette puppet for the mass market.

This Marionette puppet is a charming example of the unique and rare toys from the best British manufacturers of the 20th century, now part of Berwick Museum and Art Gallery’s social history collection.

The Gretel puppet is based on the children’s story Hansel and Gretel by the Brothers Grimm. It is made from mixed materials; its head is made of plaster and plastic and would feature either blonde or auburn nylon hair. Its wooden limbs are dressed in a wool and cotton blouse, jacket and yellow gingham apron.  Subtle detailing makes these dolls very appealing to children and collectors alike.  The puppet was manufactured in 1976 by Pelham Puppets and proved to be so popular that it continued in production for over forty years.

Pelham Puppets was founded in around 1947 by Bob Pelham, who became well known for making and popularising the marionette puppet for the mass market.  These puppets had previously been available only to professionals, but this company crafted puppets for children. Many of the manufacturer’s early puppets in particular are now considered to be highly desirable items on the collectors’ market.

At the time of the company’s inception it was known as Wonky Toys Ltd, in a nod to Bob Pelham’s military service, when he was known amongst colleagues for producing small toy donkeys from wooden beads in his spare time. They affectionately referred to him as ‘The Wonky Donkey Officer’ as they very much enjoyed his entertaining designs.  It was their encouragement that spurred Bob on to continue his craftmanship at the end of the War, rather than pursuing his initial ambition to study architecture.

Bob acquired some business premises in Marlborough and in 1947, produced his first puppet that would be sold to the public. This earliest puppet was a character known as Macboozle, believed to be based upon the Scottish music hall singer songwriter and comedian Will Fyffe, who had entertained troops whilst Bob was stationed in North Africa during World War Two.

Following a lawsuit against the company’s name, the firm was forced to rebrand as Pelham Toys Ltd – a name that is still recognisable to this day. In 1954 it was reported the company had over seventy employees involved in production and produced around 2,000 puppets a week.

Bob’s wife Anne was a notable figure in the company’s history in her own right. She had been a crucial partner in the company right from the beginning and when Bob died in 1980, Anne continued the business until 1986.  The company still produces dolls today following a successful revival by David Leech. Although many of the dolls are new in design, some of them pay tribute to the puppets produced during the Bob Pelham years.

Puppetry itself dates back as far as 2000 BC and in Ancient Egypt, puppets have been found buried in tombs. They are even referenced in the work of the great philosopher Aristotle on the motion of animals.  The first ever Marionette doll was believed to be of the Virgin Mary, which is why they have been attributed with the name Marionette – as it means Little Mary when translated from French. The Marionette puppet would be controlled by a marionettist or puppeteer, whose identity would have been hidden to the audience. The role of the marionettist was beautifully captured by pioneering American portrait artist John Singer Sargent in his oil painting of 1903, “Marionettes (Behind the Curtain)”. 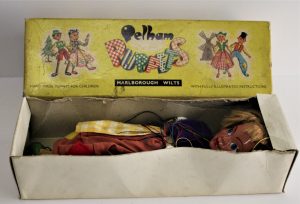 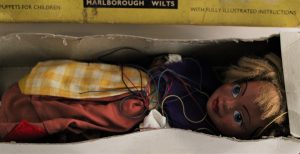