As a native to the North East, it is no surprise that the historic Hexham market town features in one of Foster’s watercolours. At the time this painting would have been produced the marketplace would have been filled with the hustle and bustle of market sellers showcasing their wares from Hexham’s renowned tanneries, breweries, and the fresh produce the town had to offer.

The Moot Hall and Old Gaol are two iconic landmarks within the idyllic Hexham townscape, seen upon entering the picturesque Northumberland town from the Market square. The collections kept in The Old Gaol and Moot Hall provide a historical timeline showcasing what life was like living in Hexham in days past. This framed watercolour is no bigger than a postcard in size and was finely painted with delicate detail by artist Myles Birket Foster in the 1860s.

Myles Birket Foster was a renowned watercolourist, engraver, and illustrator from the Victorian era. Born in North Shields in 1825, Foster was the youngest of seven siblings in a Quaker family. The Fosters moved to Tottenham, London for the sake of their father’s beer bottling company which Myles worked at briefly after leaving school in Hertfordshire.

Myles showed great artistic talent from a very early age, however, so he was apprenticed to the prestigious woodcut-printer Ebenezer Landells, who produced wood cut engravings and drawings used in popular publications of the 19th century.  Some years later, Myles established his own business as an illustrator and artist, producing engravings for Punch and the Illustrated London News, amongst others.

The artist was well-travelled across England and Europe, and he moved to the Rhineland aged 21 to publish his own work, “The Rhine and its Picturesque Journey” (1856). For the next thirteen years he dedicated much of his time to creating woodcuts and book illustrations.

However, Myles never lost contact with his northern heritage, and remained in close contact with his aunt Mary Spence of Newcastle in particular; he married her daughter Anne in 1850. Although it was commonplace to marry a cousin during this time, Foster’s Quaker heritage meant that the marriage received more approval within the community than if he had married a non-Quaker. Up until the mid-19th century, it was routine to spurn friends and family who married outside of the Quaker community.

In 1859, at the age of 34, Myles started to work in watercolour; a late age for a beginner at the time. As such, he was self-taught, which allowed his distinctive style to flourish. His watercolours often feature romantic and idealised versions of quintessentially British landscapes and landmarks, depicting countryside culture and ways of life such as farming, markets, or children playing in rural landscapes.  His pictures are usually quite small in size, painted with extremely fine brushwork and minutely detailed. His remarkable skills saw him exhibit over 400 works at the Royal Academy in his time, as well as regularly showing his work in Newcastle. His pictures proved extremely popular with Victorian audiences, with colour reproductions of his works being widely available.

In 1860, Foster moved in to Tigbourne Cottage, in Witley near Godalming, Surrey. In the same year he had been elected an associate of the Society of Painters in Water Colour, becoming a full member in 1862.  A year later, having become enchanted by the landscape of Surrey, he purchased a plot of land and built himself a house; The Hill.  The interiors were designed and decorated by the famous arts and crafts artisans Dante Gabriel Rossetti, Edward Burne-Jones and William Morris, and the house became a magnet for fellow artists and friends such as Charles Keene, Fred Walker, and William Quiller Orchardson.

In 1864, after the passing of his first wife with whom he had five children, Foster married again, this time to an artist that was outside of the family circle and the Quaker community; Frances Watson, the daughter of artist John Dawson Watson.

Foster died in 1899. It was reported in his obituary within The Times newspaper that he was one of the most popular watercolour artists of the time.

As a native to the North East, it is no surprise that the historic Hexham market town features in one of Foster’s watercolours. At the time this painting would have been produced the marketplace would have been filled with the hustle and bustle of market sellers showcasing their wares from Hexham’s renowned tanneries, breweries, and the fresh produce the town had to offer. The scene depicts an early 19th century marketplace with Old Inn (right of the Moot Hall), The Moot Hall, The Shambles, and the Town pant.

Today, the scene has changed subtly; the clock is no longer present on the Moot Hall, and the building to the left of the Moot Hall no longer exists. Having been demolished and replaced in the 1950’s, it is now home to a well-known woollen store. The Town pant of 1703 was demolished in the early 20th century and replaced in 1901 by a red sandstone memorial to William Angus Temperley. The memorial features a plaque inscribed with a verse by Wilfred Wilson Gibson, a highly regarded local poet. The arms of Hexham and Northumberland also appear on the surrounding plaques. 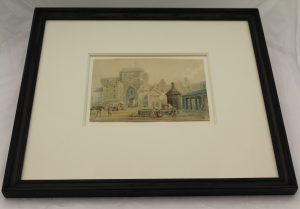 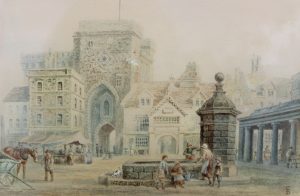