Over this most unconventional of festive periods, there has never been a better time to reflect on how Christmas traditions have changed down the generations, so why not share with you a selection of vintage toys from our collection at Berwick Museum and Art Gallery?

Museums Northumberland brings to you our Christmas themed Object in Focus.

Over this most unconventional of festive periods, there has never been a better time to reflect on how Christmas traditions have changed down the generations, so why not share with you a selection of vintage toys from our collection at Berwick Museum and Art Gallery?

2020 has brought with it significant challenges that many of us might never have imagined facing in our lifetime. Particularly, many families face the prospect of Christmas alone for the first time. But amongst this uncertainty, we can look back to the past to find examples of continuity in how people have celebrated Christmas for centuries, even in the toughest of circumstances.

For instance, gifting toys to children has been a mainstay of Christmas throughout the harshest of times, and we can see this practice echo down the years when we examine some of the examples of Christmas toys from Museum Northumberlands collections.

Can you remember your favourite toy, where it came from, and how you felt when you received it? Many of the items in our collection have been donated personally by recipients of the gifts and are linked to cherished memories of opening them on Christmas morning.

Below is a selection of vintage toys from the 1950s and 60s, with a brief history on each. Some of you may remember the exact same versions of the toys, but the concept of each of them will be familiar to all, such has been their lasting success. We hope they bring back some happy memories for you.

This game was invented in the latter part of the 19th century and known to be a very popular parlour game amongst adults in Victorian England. The name itself is derived from British rhyming slang for an un-licensed pub. In its early years, the game had various names, including, ‘Flipperty flop’ and ‘Flutter’!

The game was created by Joseph Assheton Fincher, a bank clerk who patented the application for the game in 1888. Competition from rival versions meant that the game continually adapted to suit its audience, and as such the popularity of the game continued to increase amongst the younger generations.

Like chess, Tiddlywinks has its own national associations, of which there are two; one in the United States and one in England. The associations are responsible for maintaining the rules and governance of the game as well organising tournaments.

The game is played on a flat mat with sets of small discs; these are the winks. The target is a pot and the ‘squidges’ are used to shoot a wink into flight, setting it in motion to land in the pot. This boxed version of, ‘Tiddley winks’, was manufactured by Harry Reynolds Limited and dates to the 1950’s.

The format has retained its popularity in various formats, such as the ‘milk caps’ games, which produced huge sales in the 1990s. Many children of the 90s will be familiar with the brand name, Pog, a variant of milk caps owned by the Canadian Games Company (later Universal Slammers). Pogs, or milk caps, were intended as collectibles and were distributed with popular products from McDonalds and various drinks companies. They were colourful and visually striking, making them popular amongst children and young teenagers.

Tiddlywinks has had such an impact on popular culture that international tournaments are still held annually. The current world champion is Patrick Barrie, a British player who has shared centre stage for nearly 20 years with American Larry Kahn. Together they share 14 World Single Championships between them. 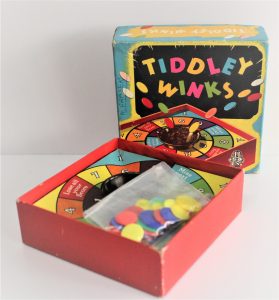 This tube of Pik-a-Styk was manufactured by H P Gibson and Sons Fentocraft, a London company, in the 1950s. The product is a version of an older concept, ‘pick up sticks’, which originated in Germany around the 1890s and has produced many variant forms. For example, a popular version is known as Mikado, which was exported to the United States in the 1930s and gained popularity quickly.

The aim of the game is to pick as many sticks as possible, usually 8 to 20 from a larger pile, without moving any. The different coloured sticks identify the points scored for each turn.

H P Gibson and Sons was founded in 1919 by Harry Percy Gibson, and continues to trade today as Gibsons Games. They are the oldest independent, British family-owned board game and jigsaw manufacturer in England. In the company’s 101-year history it has experienced all the ups and downs of the times. For instance, in 1940 its London premises was bombed during The Blitz. On-site manufacturing ceased until new quarters were secured following the war in 1946.

Perhaps due to its simplicity, the concept of pick up sticks has proved enduring over the decades. It is highly likely that you will be familiar with a form of the game and may still even play it from time to time when the Christmas board games get dusted down!

This particular mechanical money bank was made in Pennsylvania, United States in 1883 – over 127 years ago! The cast iron lion and monkey would move in tandem, as the monkey taunts the lion. When a coin is placed on the plate, the music would begin. Sadly, the mechanism no longer works. Perhaps it was very loved and used in its time, leading to wear and tear that has rendered the function inoperable. However, the item remains very beautiful and a very well preserved example of a 19th century money box that may have been gifted on Christmas day to a lucky recipient.

The box was manufactured by Kyser & Rex, who were known for producing quirky and humorous mechanical money boxes that depicted historical and everyday events or even stories of their time. This type of item was sometimes known as an ‘organ bank’ and they were originally intended to promote financial awareness amongst children in the 19th century. The highly elaborate and colourfully painted mechanical boxes proved highly popular, and they were particularly sought-after Christmas gifts of the time.

Indeed, money boxes have been popular gifts for centuries, and you can still find them stocked in toy shops, department stores and online marketplaces on a year-round basis as we enter the third decade of the 21st century. The secret to their enduring popularity may well be their simplicity, combined with the endless way in which they can be designed and presented, whilst all the while fulfilling the same basic function – to save your money! An eternal concept that never goes out of style. 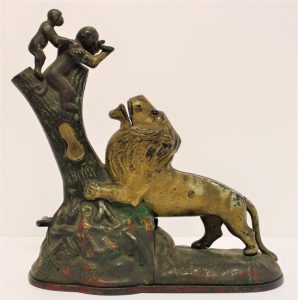 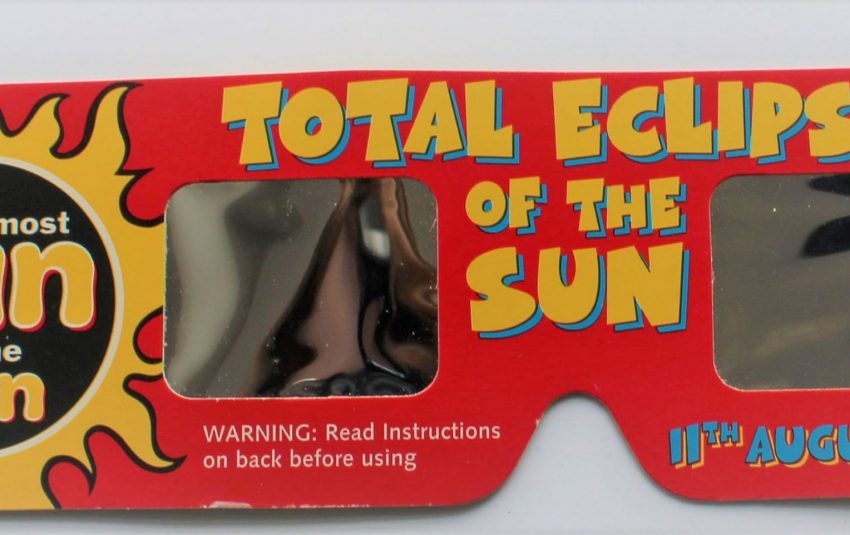 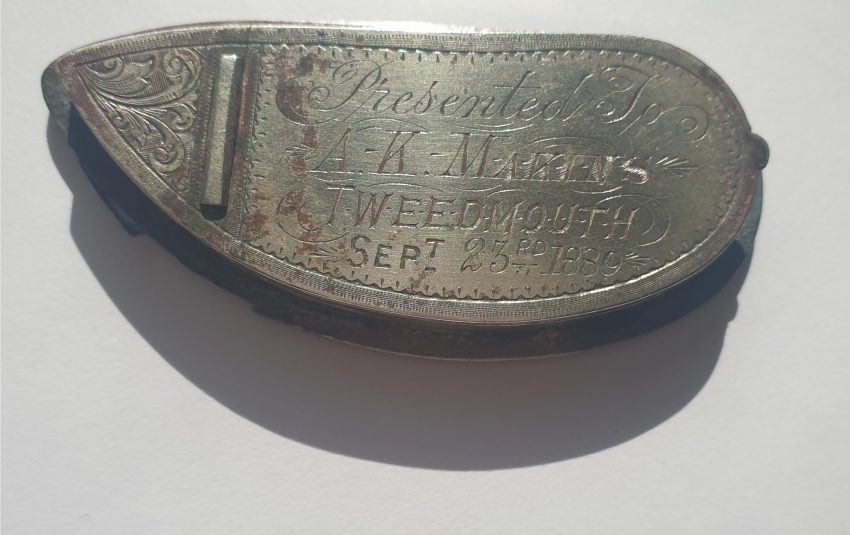 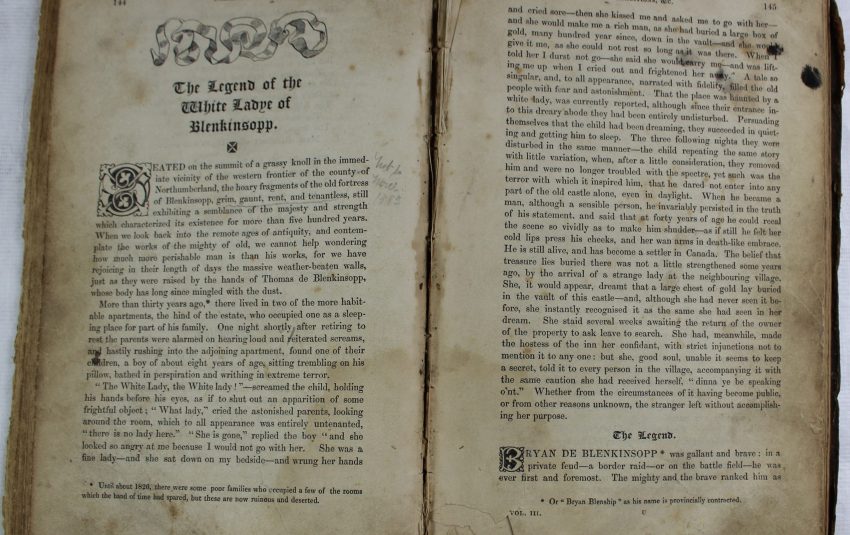 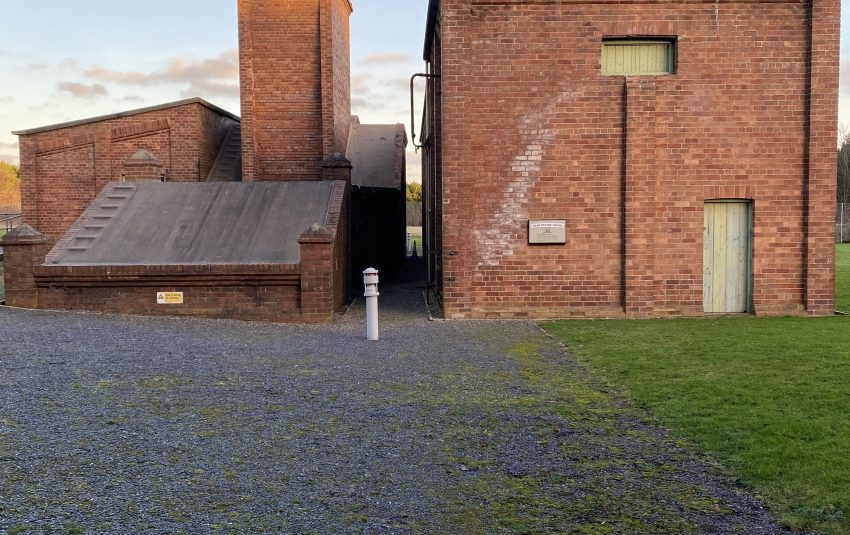 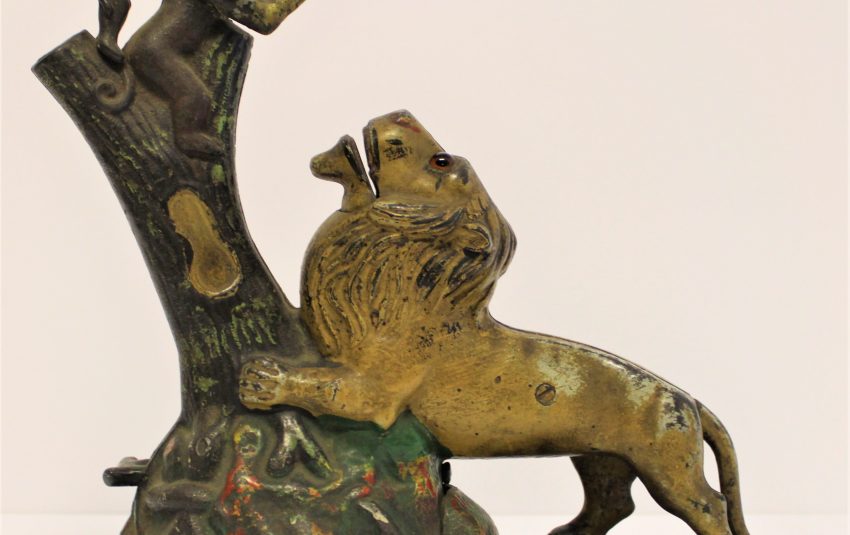