The Feast and Crowning of the Salmon Queen

Long have the shores of Berwick and the Tweed provided a home for the salmon with its silvery pink shimmering skin and dotted markings. Today, we share with you an age-old tradition close to the hearts of Berwick-upon-Tweed town folk.

The Feast and Crowning of the Salmon Queen, Tweedmouth

Long have the shores of Berwick and the Tweed provided a home for the salmon with its silvery pink shimmering skin and dotted markings. Today, we share with you an age-old tradition close to the hearts of Berwick-upon-Tweed town folk. The Feast and Crowning of the Salmon Queen. We are taking inspiration from the costume collection at Berwick Museum and Art Gallery, with a cloak that was once used by a retiring Tweedmouth Salmon Queen. The cloak was used from the mid 1940’s until 1995. Complete with exquisite embroidered swan and salmon detail by Dora MacGregor.

Tweedmouth lies on the south bank of the River Tweed and is connected to Berwick town centre, on the north bank, by two road bridges and a railway bridge.

Once a busy port with its own thriving fisheries and centre for the salmon fishing industry, the town continues to pay homage to one of its oldest traditions; that of catching salmon. The crowning of Berwick’s Salmon Queen traditionally took place in mid-July as part of the celebrations for the Tweedmouth Feast during the Berwick Trades Fortnight’s Holiday. It could be said that the Celebration of the Salmon or the Crowning of Salmon Queens is strongly linked with the fertility festival between youthful fertility and the harvest reaffirmed. However, the modern Tweedmouth Queen dates to around the 1950’s and has adapted itself over the years to maintain and commemorate the joyful occasion.

The Tweedmouth Feast is an annual celebration held at Berwick-upon-Tweed; the high point is the Procession surrounding the Coronation of the Salmon Queen on the Thursday night. The feast day marks the festival’s patron Saint Boisil (sometimes spelled Boswell). St Boisil was one of the first-generation monks living in Melrose Abbey, an off shoot of Lindisfarne. He was known for his predictions and through teaching the young St Cuthbert – he predicted a great future for the Northumbrian Saint. St Boisil’s Parish Church, Tweedmouth, has a weathervane in the shape of a salmon celebrating the custom of having a festival on the feast day of the Patron Saint.

Today the Tweedmouth schools elect a Salmon Queen to mark the start of Salmon Week, a traditional celebration which pays homage to the long history of salmon fishing on the river. Starting at the Town Hall, the Queen and her attendants make their way to the Queen’s Gardens  where the Mayor performs the ceremony as the Queen waits to be crowned and her predecessor waits to give her farewell address, watched by sister royalties the Eyemouth Herring Queen and the Spittal Gala Queen. The newly crowned Salmon Queen then travels south across the river in a fishing coble, a boat traditionally used to catch salmon.  In years gone by the coble would have been rowed over the Tweed, but nowadays the boat is towed over the old bridge, often followed by the Berwick Pipe Band and local community groups.

The history and celebrated heritage of salmon fishing in Berwick-upon-Tweed has long been documented, in an account from

History of Berwick-upon-Tweed, being a Concise Description of that Ancient Borough, from Its Origin Down to the Present Time, to which are Added Notices of Tweedmouth, Spittal, Norham, Holy Island, Coldingham, Etc by Frederick Sheldon, 1849 recalls,

‘This excellent fish has, from time immemorial being the staple commodity of Berwick, its boast, and principle article of merchandise. For many centuries have the fisheries in the Tweed been renowned for their salmon. In England and Scotland, fishing’s in the sea and navigable rivers belonged to the Crown. Early documents show that numerous grants were made by the Crown to monasteries and friaries of royal fishing’s, on the Berwick side of the river. Until about the year 1790, the salmon sent from Berwick were either salted and drained, or boiled and pickled with vinegar there have been 40,000 kits of salmon sent from this town in the course of a season..

It was recorded that to keep the salmon fresh after it was caught, it was packed in ice sourced during the winter period and stored in purpose-built icehouses. Sometimes the ice even came from Norway to keep this precious commodity fresh!

Several ice houses have been built in Ravensdowne and Bank Hill, the quantity of ice laid in is surprising . One winter it amounted to 7,600 cart loads and when the ponds and rivers in the neighbourhood of Berwick have failed to yield sufficient the company sent over to Norway for shiploads of this valuable commodity.

In later years with the development of the railways, the opening of the line between Berwick and London provided traders with better means of transporting salmon, which drastically reduced the amount of ice previously required.

Salmon was commonly fished for in four different ways, these included:

The caught salmon would be transported in barrels made by coopers. Outrage was reported in Perth, Scotland during the 1740’s as the kitted salmon (boiled then sealed in vinegar) were transported to London in fast small sailing vessels called smacks. Initially this innovation met with local resistance and the company which started it apparently employed coopers from Berwick upon Tweed as the local Perth coopers were not as proficient as the Berwick coopers.

By the end of the late 1980’s and 1990s salmon numbers decreased. Salmon netting was reduced on the account of salmon farming.

The Celebrated History of the Mythical Salmon

Salmon ceremonies have taken place for centuries, the village of Norham in Northumberland was known for its tradition of net fishing from cobbles (boat) and has long since continued to commemorate the opening night of salmon season on the 14th of February, Valentines Day, with a celebration known as, ‘Blessing of the Salmon’. The local vicar would bless the water, nets and boat at midnight and in return he would receive the first salmon. Like most traditions this event has been adapted to suit modern ways of living and these days takes place in the early morning rather than late at night.

In Gaelic culture this tradition of commemorating salmon still exists, Am Bradan Mor, the great salmon, is still understood as a symbol of wisdom and learning. The Salmon of Knowledge creature features heavily in Irish mythology known as “The Wise” and was once transformed into a salmon.

Physical depictions of salmon can still be seen today in many cultures’ past and present. Pictish was an ancient language spoken by the Picts, the people of eastern and northern Scotland from Late Antiquity to the Early Middle Ages. In Scotland and the Tay, the salmon was important enough to be carved by a Pictish craftsmen. The National Museum of Scotland collection has examples of the Meigle Pictish crafted stone from the River Isla dating back more than 1,000 years ago.

This year the Salmon Queen Ceremony will go ahead on the 22nd July with significant safety procedures in place to maintain a covid-19 safe event. The Ceremony hopes to resume its usual activities in 2022.

We would like to know if anyone has any information about the Salmon Queen cloak in our collection. We are particularly interested in any photographs that show the cloak worn by the Salmon Queen. Please get in touch, 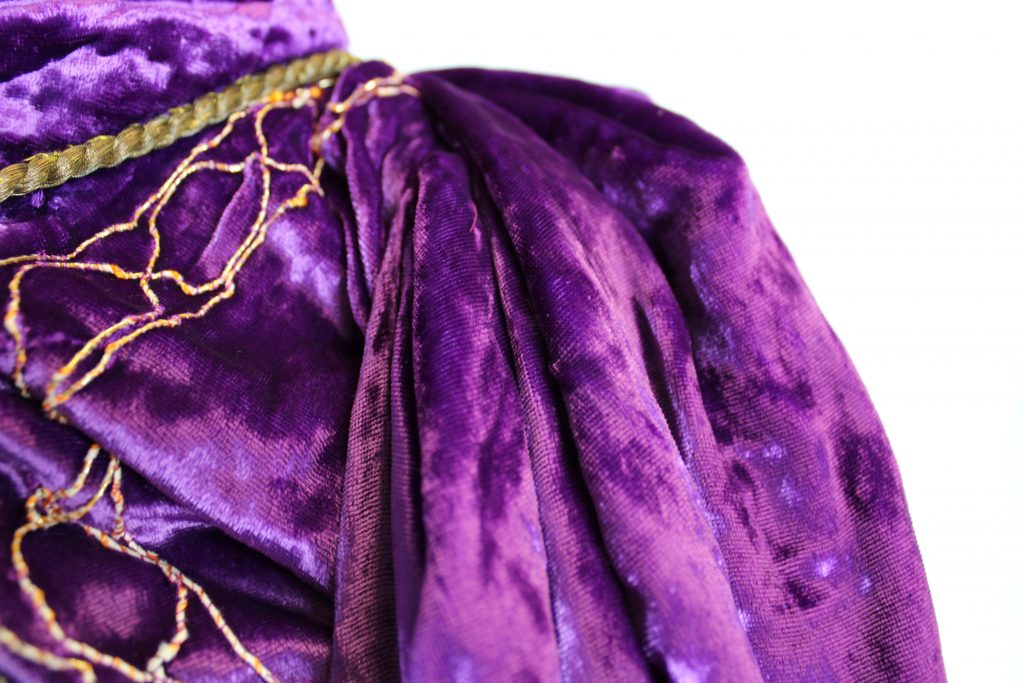 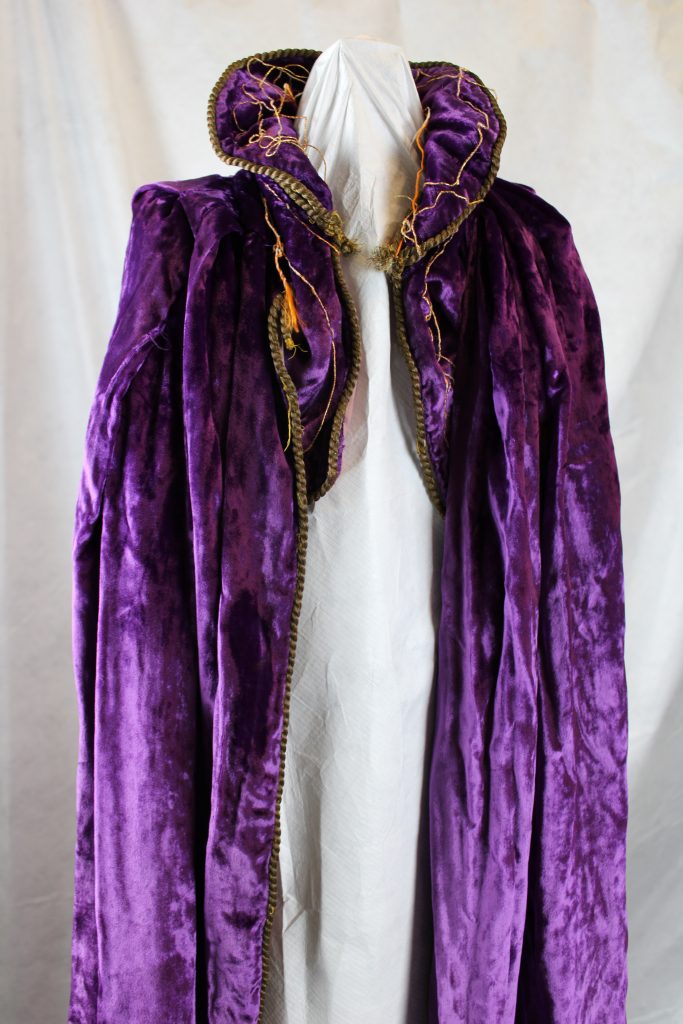 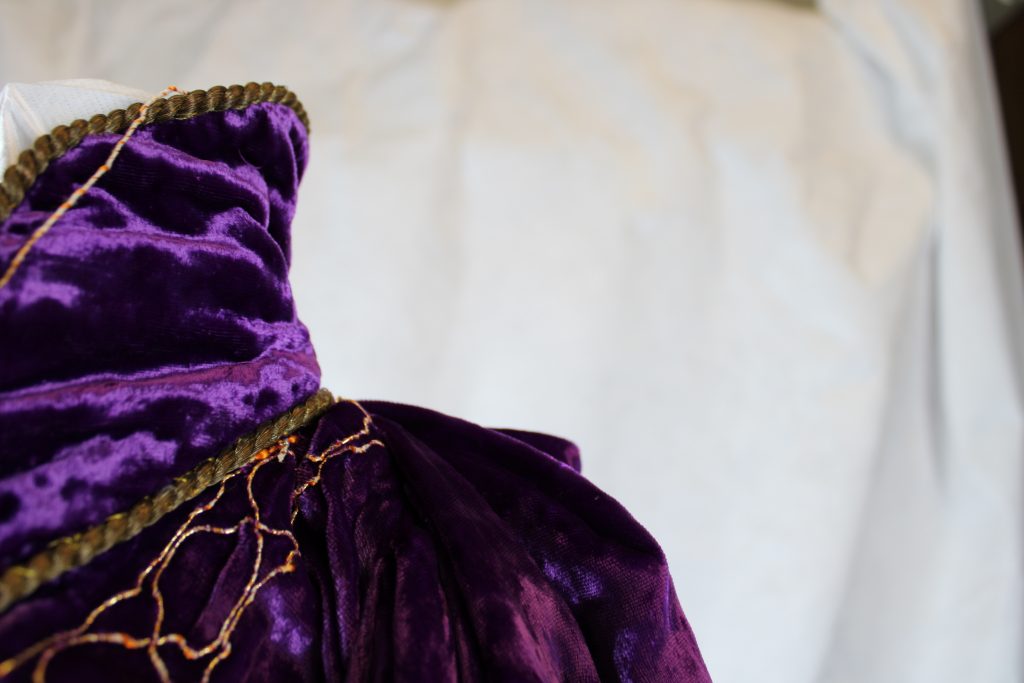 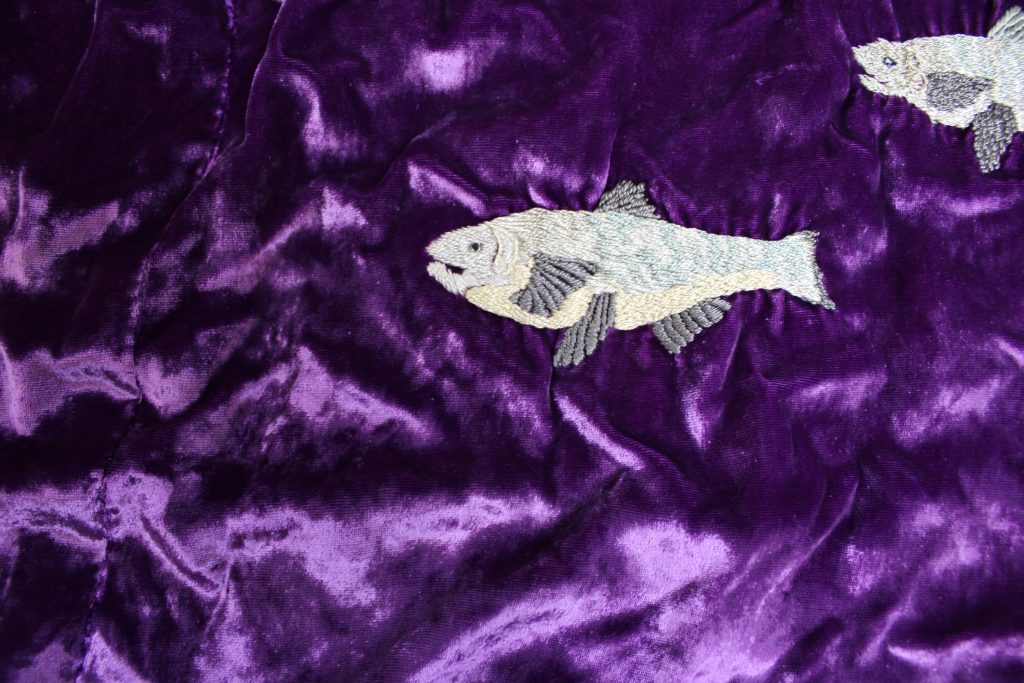 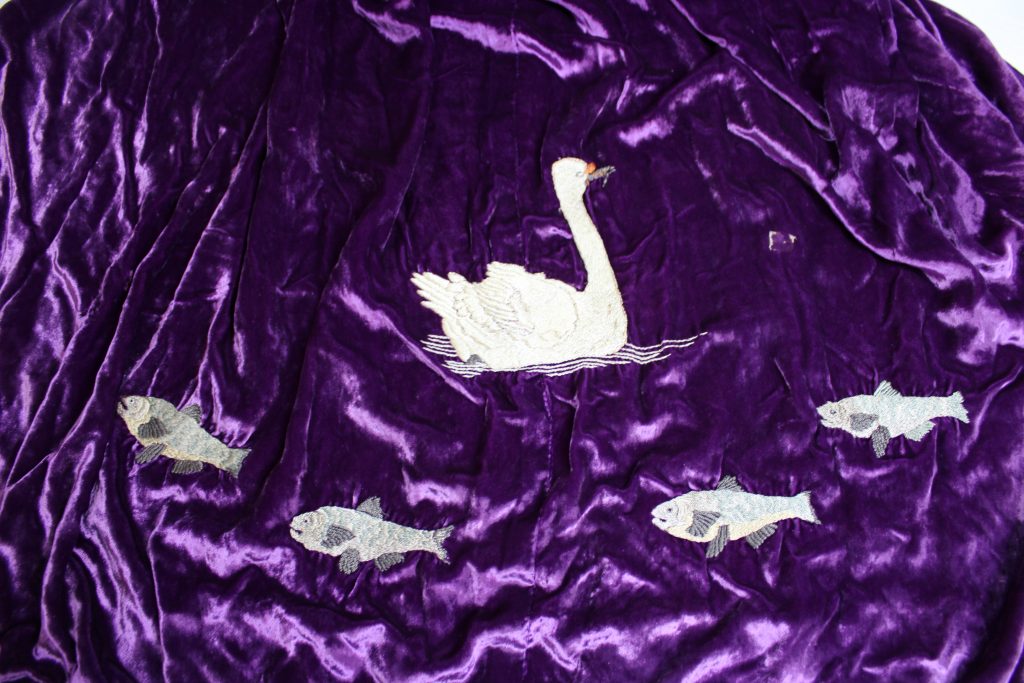 Jonny has produced a highly individual and colourful take on some of Northumberland’s most celebrated stories which include a homage to the Salmon Queen at Berwick Museum and Art Gallery. 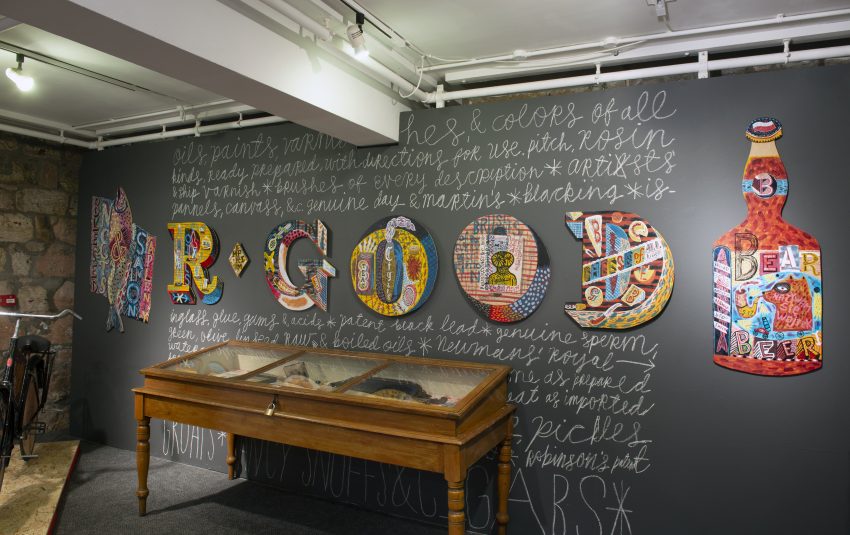