Badges and collecting tins (pictured) like these were used by gay men and women to collect money on behalf of miners and their families during the strikes of 1984/85.  This grass roots movement raised money through daily collections outside supermarkets, during benefit gigs, marches and women-only events. The groups managed to raise £20,000 for those families affected by the strike.

One of the founders of the Lesbians & Gays Support the Miners (LGSM), Mark Ashton, wanted to draw a parallel between the struggles facing miners and gay men and women who were fighting for their rights.  The wife of one miner from South West Wales said of the support received from LGSM:  “… just AMAZING ! … I could not stop talking about and reading all the stuff your group’s achieved … when there’s not much [optimism] around it [copies of LGSM’s archive material] came through the post like a ray of sunshine!!”

One of LGSM’s most successful events was held at the Electric Ballroom in Camden Town, London on the 10th December 1984. ‘Pits and Perverts’ brought together live bands, dancing, comedy acts and an exhibition; the night was headlined by Bronski Beat. At the end of the evening a spokesperson David Donovan from the National Union of Mineworkers addressed the crowds:

‘”You have worn our badge ‘Coal Not Dole’ and you know what harassment means, as we do. Now we will support you. It won’t change overnight, but now a hundred and forty thousand miners know about blacks and gays and nuclear disarmament and we will never be the same.”’ 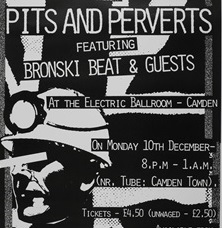 According to Lucy Robinson’s book Gay Men and Left in Postwar Britain:  How the Personal Got Political (Manchester University Press: 2007), Mark Ashton’s LGSM was an early, and to some extent successful attempt to integrate the Left and gay and lesbian activism.  As such LGSM’s work was a precursor to a new form of identity politics that has become increasingly visible in modern political and cultural life.

We are interested to hear about your thoughts or experiences on this subject, especially if you have any memories of LGSM.  Please contact: collections@museumsnorthumberland.org.uk

You can read more about the LGSM movement here: www.lgsm.org