We share with you today a selection of objects linking the local community of Berwick-Upon-Tweed and the First World War. The objects explore the life of men and women, on the home and on the Western front from 1914-1918.

We share with you today a selection of objects linking the local community of Berwick-Upon-Tweed and the First World War. The objects explore the life of men and women, on the home and on the Western front from 1914-1918.

A beautifully enamelled badge decorated with Crowned Royal MR cypher and Tudor rose, suspended from a ‘Q.M.N.G.’ bar that once belonged to a member of the Queen Mary’s Needlework Guild. This badge came into circulation after a response from Queen Mary in the early days of the First World War because of a letter issued through the press on the 4th August 1914 asking,

to the Women of the Empire asking that it might be rendered ‘To alleviate all distress occasioned by the War!’

During this time the Guild provided comforts to the solider by creating articles of clothing and surgical equipment as well as other gifts to the troops fighting for King and Country at home and abroad. It became incredibly successful, and eventually branches were extended overseas.

This badge was worn by volunteer members who undertook regular work for the Guild and would have cost members around two shillings. Today two similar badges exist, this one and a similar badge which is gilt and enamel bearing war service bars from 1914 right through to 1918 on a silk ribbon with Q.M.N.G suspension bar.

The Royal family have supported the Charity for many years with its foundations dating back much further than 1914. In 1882 Lady Wolverton received a request from a matron at an orphanage asking for extra clothing for the children in her care. It was from this moment that the charity started, albeit on a small scale.

By 1885, The Princess Mary Adelaide of Cambridge, Duchess of Teck became the Guild’s first Royal patron, later renamed the London Needlework Guild in 1889. When the Duchess died in 1887 the patronage was continued by her daughter the Duchess of York, a member since her youth.

In 2010 the Charity changed its name to, ‘Mother’s Clothing Guild’, in honour of its former patron the late Queen Mother. In 2003 HRH Princess Alexandra, the Hon. Lady Ogilvy became joint patrons. Both meet regularly with volunteers from the charity which distribute at least 56,000 garments per year.

For the families of loved ones who had been sent to fight on the Western front during the First World War they knew only too well that losing loved ones was a harsh reality. The entire nation waited patiently as towns and villages saw generations of men obliterated overnight in some cases.

Today the Battle of the Somme is considered one of the worst losses of human life during wartime with over three million serving and over one million casualties. 50,000 casualties were reported on day one of the battle. A year after the Somme, soldiers serving at Passchendaele would face some of the worst shelling and bombing resulting in over 244,000 casualties. Some soldiers returned home or to hospitals for respite having faced injuries, before returning to the front line to face death again.

Some never returned home, having fallen during battle. By the end of 1918 the loss of life was increased with impact from Influenza known at the time as the Spanish flu. The British nation was in mourning for the generation it had just lost.

To recognise the efforts made by active and fallen soldiers a set of campaign medals were instituted by King George V in 1919 and produced and distributed in the 1920’s by the War office.

In total there were five campaign medals made available for those who had served during the First World War. The most popular ones Pip, Wilfred and Squeak were awarded to an individual who had taken part in a military campaign outside of the United Kingdom in a Theatre of War they consisted of,

Affectionately named, Pip, Squeak and Wilfred after a comic strip produced by the Daily Mirror in which Pip was a dog, Squeak a penguin and Wilfred a baby rabbit. The name, rank, unit and service number of the recipient are impressed on the reverse of the Star and on the rim of the British War Medal and Victory medal unlike campaign medals from the Second World War which bear no impression.

Pip, Squeak and Wilfred were awarded to around 2.5 million, whereas the pair without the 1914, or 1914-15 Star were awarded to 3.2 million. Commonly known as Mutt and Jeff, named after characters from an American cartoon strip created by Bud Fisher.

Next of Kin Memorial Plaque

The next of kin memorial plaque, medallion also known as dead man’s penny or death penny was made from bronze and awarded to all service men and women who had fought in the first world war.

Inscribed with the name of the fallen soldier and features the figure of Britannia facing to her left holding a laurel wreath in her hand. In her right hand she is holding a trident, representing Britain’s sea power with two dolphins each facing Britannia on her left and right sides. A roaring lion stands in front of Britannia, with another smaller lion under its feet, biting the German Imperial eagle. Around the edge of the plaque are the words “He died for freedom and honour”. These words were specified by the design competition committee and were to be included in any design submitted.

The design was created by medallist Edward Carter Preston who had entered a competition along with 800 other entries to win the commission. The medallist used the pseudonym Pyramus when entering his design.

Unlike the campaign medals (only issued to those serving overseas in conflict), the next of kin memorial plaque was an acknowledgement of the sacrifice made by everyone who had lost their life during service, 600 plaques were awarded to service women.

The Stokoe family from Berwick-upon-Tweed are no exception to the great loss suffered, like many they lost two of their sons in the space of two months.

Remembered with honour at Railway dugouts cemetery near Ypres

Remembered with honour at Tyne Cot cemetery near Passchendaele

Below are the British War, Victory medals and next of kin memorial plaque, once belonging to the Stokoe family from Berwick-Upon Tweed who kindly donated the objects in the late 1990’s. 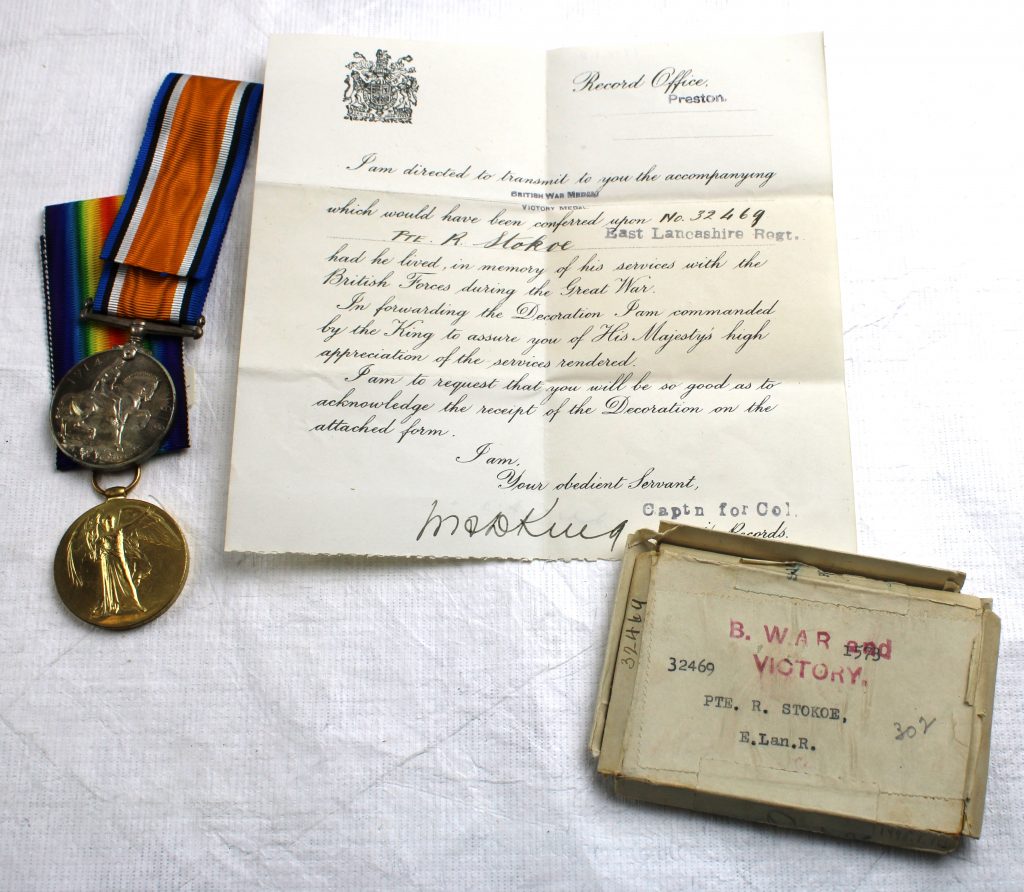 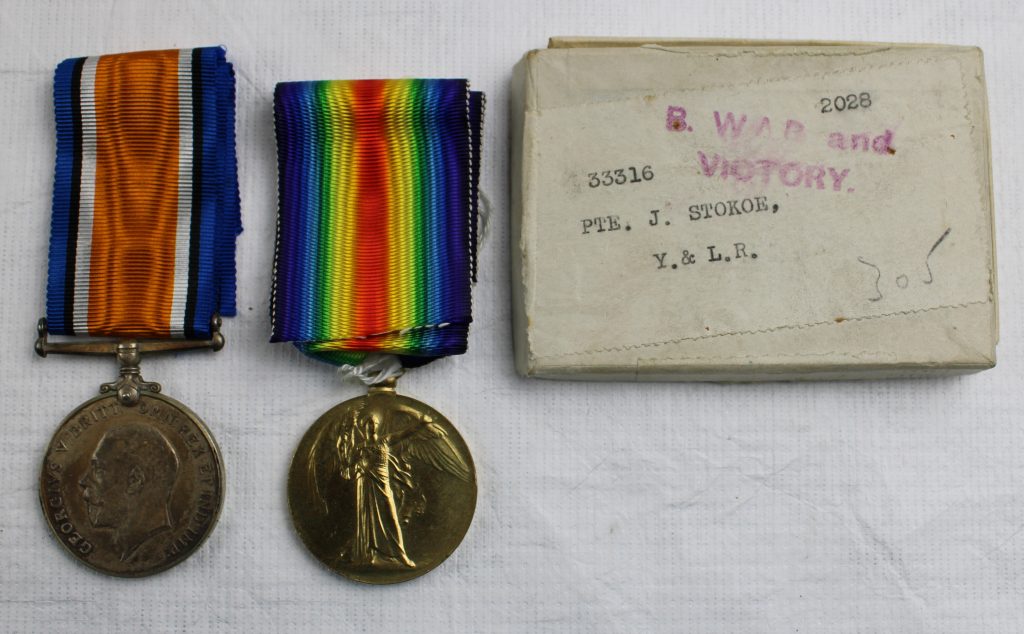 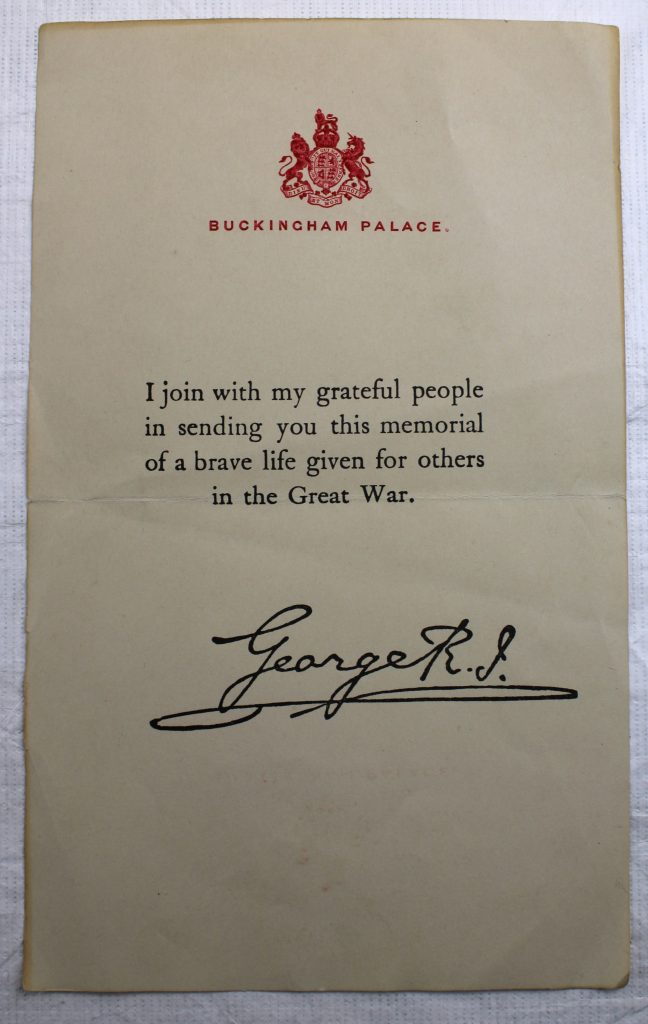 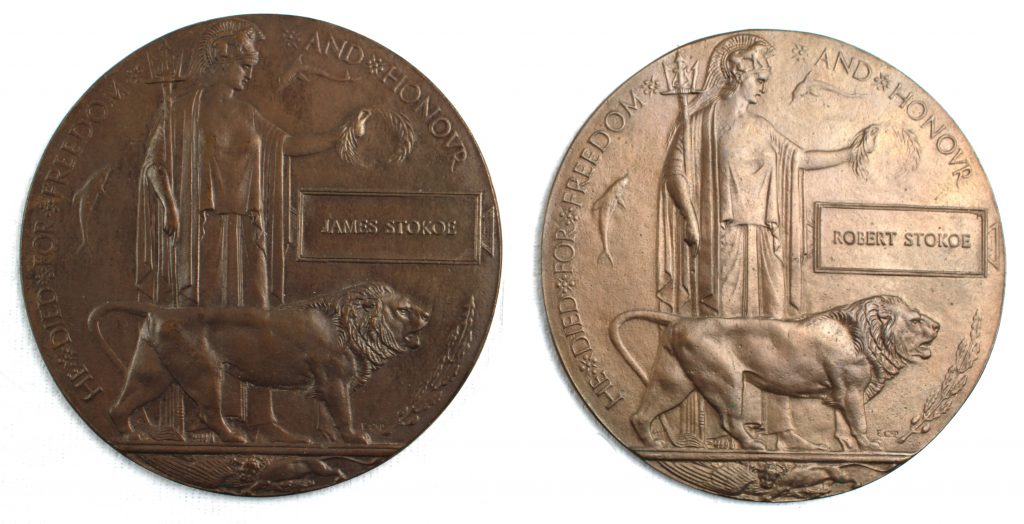 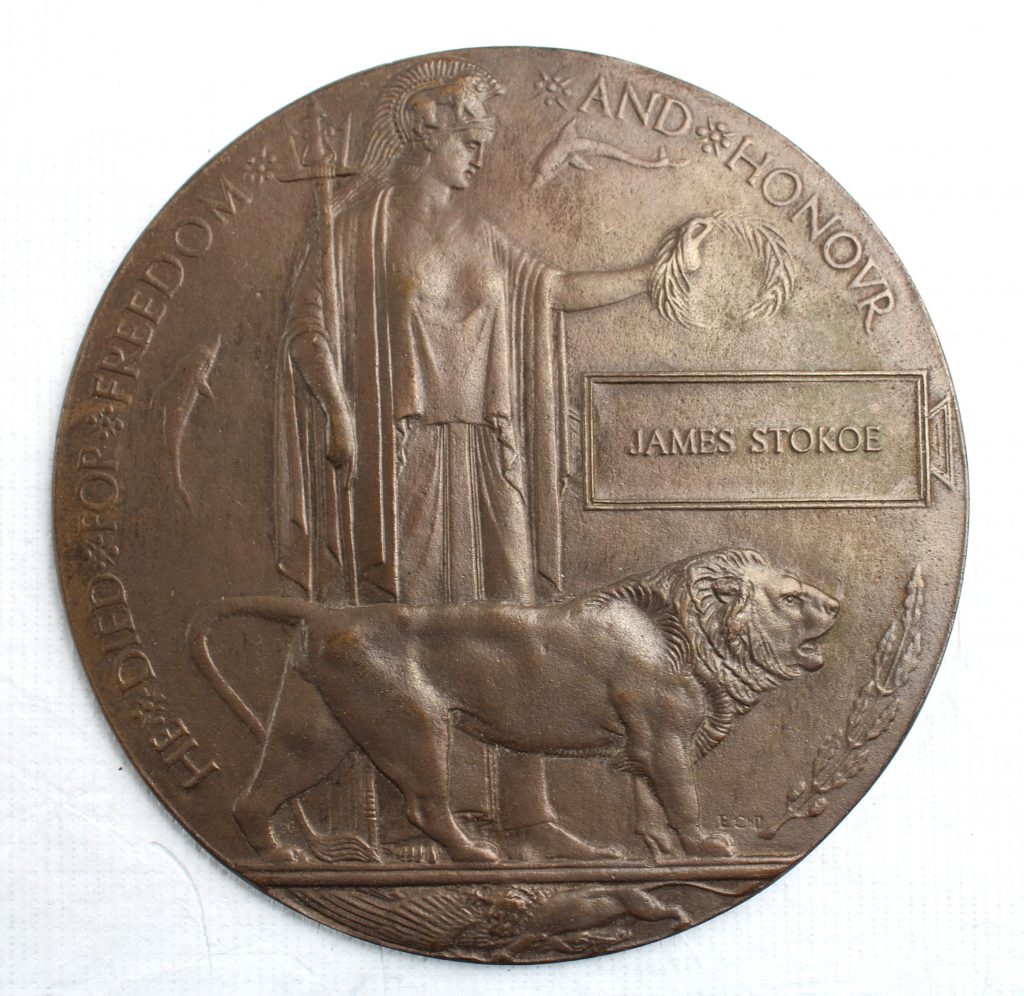 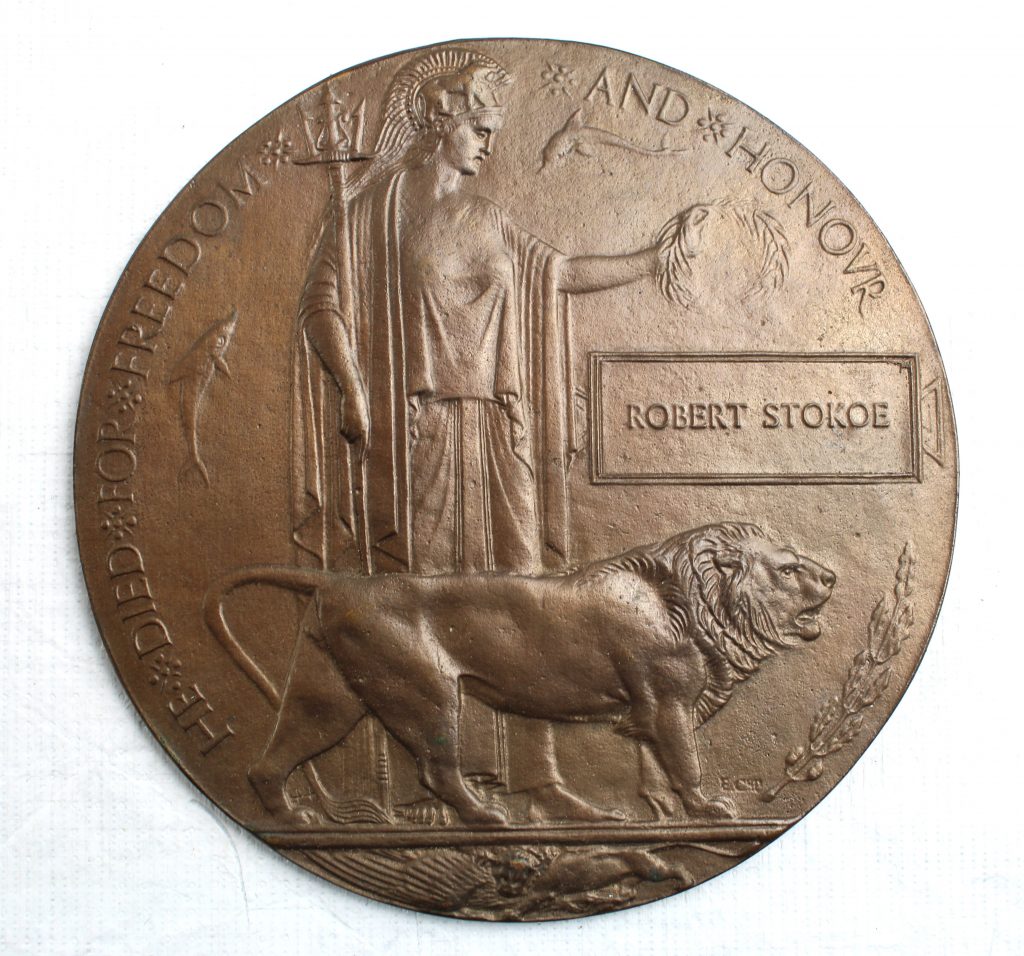