A Traveller and a Shepherd 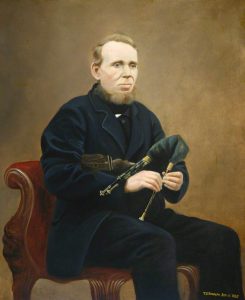 This painting is of Thomas Clough, otherwise known as the “Prince of Pipers”. He was part of a family of pipers, the Cloughs of Newcastle. The Cloughs were also a family of miners and he himself was a pitman and sinker (a very dangerous occupation).

Later in life he participated in piping competitions and was so good that he had to stop competing – it wasn’t fair on everyone else! He kept playing of course and even played for the Duke of Northumberland. This date for this painting is c. 1885, the year of his death.

It was painted by Thomas Stanton Bowman probably from a press photograph. The photo itself is from a scrapbook made by Alfred W. Cocks – an avid bagpipe collector whose collection now resides in Morpeth Chantry Bagpipe Museum. This scrapbook inspired Matt Stokes to make a film entitled A Traveller and a Shepherd that can be seen at the Chantry in 2019.