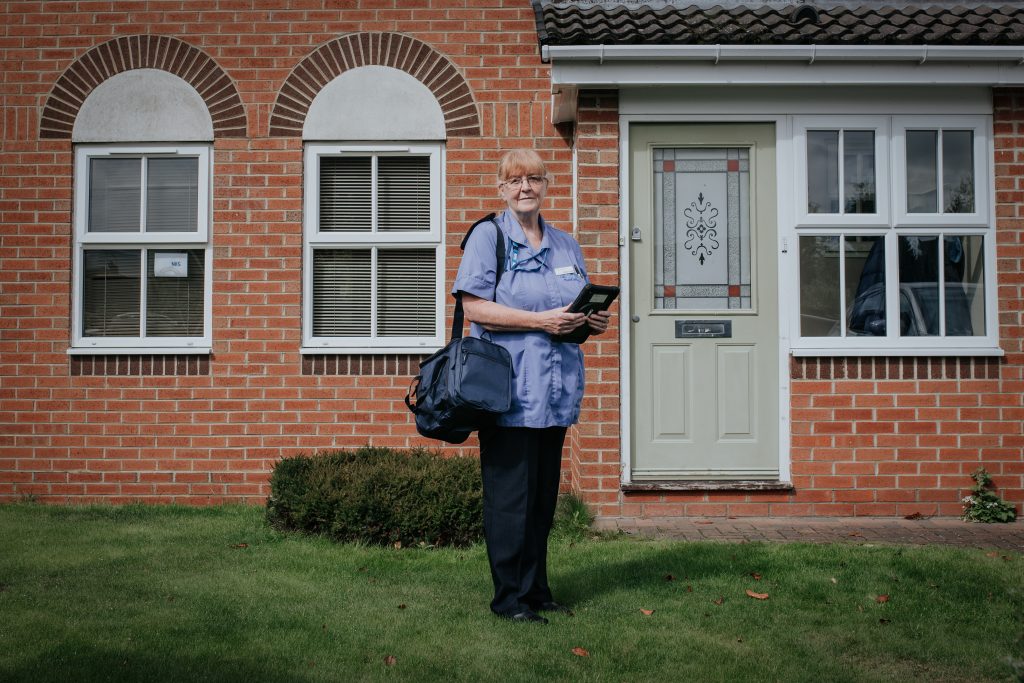 I work part-time and don’t have set days, I put myself forward whenever they’re short. As a community nurse I do all sorts, but generally I work with the elderly population. It could be changing wound dressings or catheters, and we’re also involved in palliative care, which of course has been at the fore with everything that’s been going on. I’ve been doing community nursing since 1999. It’s very diverse there are no two days the same even though you might see the same patients.

My work changed because many services withdrew, so we were picking up a lot more of the people that we wouldn’t normally see because they weren’t going to the doctors surgeries to have dressings done, or they weren’t seeing podiatrists who often we work hand-in-hand with. It was a strange time when you were the only one on the road, it was like apocalyptic and then all of a sudden you see the Tesco van and it was a ‘wave and a beep’, just appreciating each other. Or going to the shops where they let you in early if you were an NHS worker. I only used my badge once as I needed to get some flour.

We weren’t always welcome into people’s homes because of their anxiety – we had to approach them and speak at a distance at the front door. The elderly population can be isolated anyway, but what brought it home for me was they were totally cut off when their families couldn’t go and see them. It’s really hard for people in care homes – certainly in the case of those living with dementia – to understand why they can’t congregate in the dining room or lounge, all of a sudden they aren’t allowed and have to stay in their rooms. And we’re approaching them in their masks and visors so they can’t identify that we’re smiling, so that can be very frightening for people.

It’s been the worst time but it’s also brought out the best in people. I think what I’ve realised is the people I work with are more resilient than they realise. I don’t think they understand how good a team they are. We’ve rallied together and supported each other, despite the fact that a lot of the staff have been petrified that they’re going to take Covid home. When I get home, I put my shoes in a bag, and as soon as I step through the inner door everything else goes in the wash bag and I go straight in the shower, because you don’t know what you’re passing on.

I’m proud of turning up for work. And doing extra because everybody was pushed. We had staff who had to isolate, and everybody stepped up. There were times when you looked round and you could see everyone was exhausted. But family members have been so appreciative, especially when they’re shouting through the window outside and you’re the one that’s inside with their relative saying ‘it’s your daughter’. That can be really sad, but at least you’ve been a conductor of some sort of communication.

I’m not a gardener but thankfully we have a garden, and the weather was nice, so during lockdown we sat out to relax. And then when our granddaughter was finally allowed to visit, that’s when I did get very upset, because all of a sudden I could hug her again. We drew a lot of rainbows together!