On the Thames and Snow scene: Railway Station by Henry Muhrman.

Henry Muhrman was an American artist, born in the city of Cincinnati in Ohio approximately 1854-55. His parents were German, and his brother Charles H Murham was a professional photographer, known for his stereoscope slides and portraits.

Henry began his career as a lithographer, studying at the Cincinnati School of Design before to Munich to develop his drawing skills. It was here he gained a valuable insight into water colour painting and he was encouraged to take up art as a profession.

In approximately 1878, Muhrman moved to New York, where he showcased his work at various exhibitions in Pennsylvania and Cincinnati, and by 1882 he was living and exhibiting works in London. During this time, he was greatly influenced by the work of his fellow American, James McNeill Whistler. In 1899 he exhibited works in Paris.

His final years were spent in Meissen, Germany as a recluse. The work produced during this time included the regular use of pastels. His death was recorded on October 30th, 1916 in Meissen.

Muhrman produced many paintings and drawings of the River Thames near Chiswick.  His work at first sight can appear rather dark and monochromatic, but closer inspection reveals delicate touches of colour, which subtly introduce atmosphere and bring his scenes to life. In the two sketches below the use of white pastel depicts the harsh winter frost across London City. 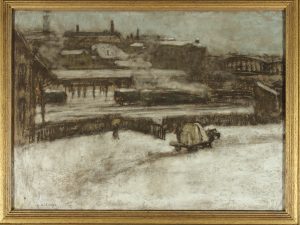 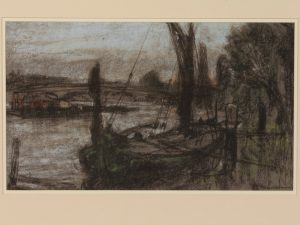 To view these objects, please contact us via our enquiries page: