Watercolour of a Robin by Jimmy Floyd

An exceptional watercolour by an Ashington Group member. 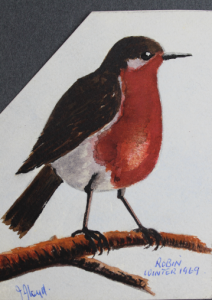 Jimmy Floyd 1898-1974 was a founding member of the world famous Ashington Group, who came together as a collective in 1934. Alongside his sketches and paintworks Floyd was an expert in woodwork with ability to carve intricate wooden sculptures, one of which remains in the museum collection. 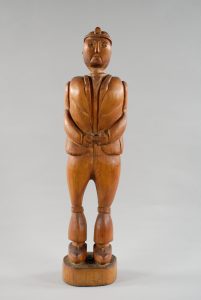 Floyd himself was an ‘onsetter’, stationed at the shaft top, who supervises the loading and unloading of persons in the conveyance and to give the necessary signals. He later spoke about the distinction between the trades of those men who worked in the mines, which he had felt was often overlooked:

‘Me and Oliver Kilbourn were the only two miners in the club when it started. There was a lot of lads like blacksmiths, fitters and clerks belonging to the colliery that joined. But with Ashington being so well known as a mining town they labelled us all as miners.’