A picturesque Bothal Weir in winter.

In 1934, a small group of miners that had developed an interest in art hired Robert Lyon, Master of Painting at Armstrong College Newcastle (then part of Durham University) to teach an Art Appreciation class as part of their studies with the Workers Educational Association (WEA). The WEA was founded in 1903 and provided education to working people who could not access or afford further or higher education.

Edward Laidlaw (1918-1988), a colliery joiner, was a member of the group that in time became known as the Pitmen painters.  Over the next 50 years, the Ashington Group met weekly, experimenting with techniques and materials. The story of the Ashington Group would later inspire Lee Hall’s famous play ‘The Pitmen Painters’.

The ink drawing depicts a picturesque Bothal Weir in winter. The Bothal Weir is situated on the River Wansbeck just outside of Morpeth, Northumberland. 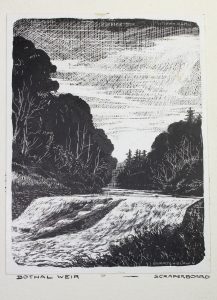 The back of his card reads, ‘With Best Wishes Christmas 1962. Eddy Laidlaw’. 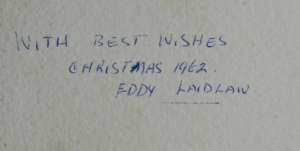