Lying in hospital for first class wit, hits, skits, defunct puns, and select tit-bits. Written in NORTHUMBERLAND DIALECT by clever chaps and all other belonging Newcastle, Gateshead or somewhere else. It is full of droll, queer gam and enough to share to make everybody fit with laughing until they burst. The name of Chater is as familiar as to the Northumbrians as ‘Old Moore’; his almanacks are to be found in almost every house. Published by J.W.Chater, Chymist, Publisher, Advertisement Agent of 52 Clayton Street Newcastle-On-Tyne.

Chater books were massed-produced annual publications; approximately 20,000 copies were printed each year between the 1860s and 1880s in Newcastle and Northumberland. Initially selling for 3d, the price eventually rose to 6d. Although many were published, very few survive. They include songs, poems and sayings in both Geordie and Northumbrian dialects, in addition to adverts that provide great insight into the type of products people were buying at the time. 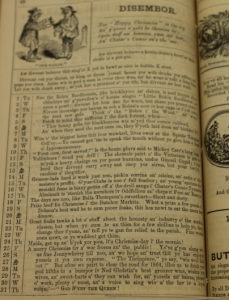 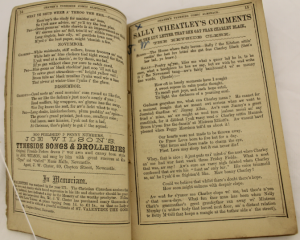