Hexham was a place where tradition and allegiance to the Crown were important. This can be seen in the extraordinary history of a skull and helmet in the Old Gaol collection...

This skull is said to belong to Sir John Fenwick, a Colonel who fought in the Royalist army during the English Civil War. Fenwick was from a great Northumberland family and resided close to Hexham Abbey. He was held dear by many of the inhabitants of the town and by the clergy in Hexham.

Fenwick died at the Battle of Marston Moor on July 2, 1644. He was hit from behind by an axe, the blow smashed his helmet and pierced his skull. The battle was a catastrophe for the Royalist cause – over 4000 men were killed and the defeat cemented Oliver Cromwell’s reputation both in Parliament and as a commander of armies in the field.

The skull was analysed by experts at Newcastle University in 1992. The skull suggests that Fenwick had a strongly built face with a prominent nose.

After the battle, the helmet was retrieved along with Colonel Fenwick’s skull and were sent to Hexham Abbey. They were displayed in the Abbey until the 20th century, presumably as a way of demonstrating the town’s loyalty to Charles I, who was ultimately defeated and executed by Parliamentarians in 1649.

There is another, older, history of the helmet too. 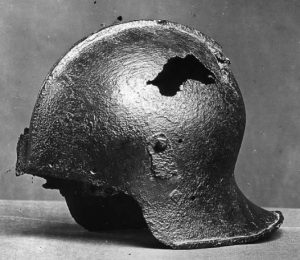 Traditionally this helmet is believed to have been worn by the Duke of Somerset during the Battle of Hexham – one of the Wars of the Roses – fought in 1464. The Duke’s force was defeated and he hid in a barn in what is now Dukeshouse Wood to the south of Hexham. He was captured and executed in Hexham and his body was buried within the Abbey. It is thought that Colonel John Fenwick removed the helmet from the Abbey in around 1644, but the helmet could not stop the blow that killed him at Marston Moor.

The style of helmet fits the story. It dates from around 1460, and is an Italian made piece known as a ‘sallet’. It also shows evidence of remodelling which was probably done by Fenwick in the 1640s.

The skull came to the Gaol many years ago when it was used as offices by the Lockhart solicitors firm. There is a story that the skull soon decided on a ‘favourite’ room in the Gaol. If it was moved from its favourite room, it would soon return there, and no one knew how it moved between rooms and floors!

Read more about Matt Stokes’s film Felons which is inspired by collections at the Old Gaol.